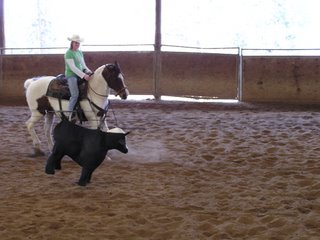 This is Cals Eclipse. He's Lena's half brother, the first foal out of their foundation mare - Lena was the last.

He has been a world champion cutting horse, true, but more important, he has been a teacher and mentor for probably hundreds of students of horsemanship throughout his 23 years on this earth.

Cheri told me the last time we were up there that they literally built their business around him - with people coming from miles away just to ride him, calling in advance to be sure he was available.

Those of us who know him understand why.

He taught me to be aware of my body and that my every movement means something to him, whether it was what I wanted to communicate or not. He taught Steve to ride with his eyes closed. He's taught countless people to sit back and let a master work the cow.

He's never mean, is always willing to work, and is as smart, playful and gentle a horse as I've ever met. He will get out there with horses 1/4 his age and keep up - if not surpass - simply because he is driven that way.

He has a very expressive set of ears, too. I have a before and after set of pictures of Steve cutting on a horse named Peekaboo, taken while sitting on Eclipse. His ears tell us exactly what he thought of her efforts that day.

He is an escape artist, too. He likes to get out and torment the people chasing him. Cheri tells the story of one of his most famous - and nearly fatal - escapes. It was winter and the deck around their house was icy. Eclipse got out and slipped on the deck while capering around the house. He fell - hard - and hit his head and neck. It was unclear for awhile if his neck would ever be okay, but eventually it was and he went back to training novice riders.

Aside from my own riding experiences with him, I have two memories that stick in my head about this fine horse.

One cold and nasty day, Ike was putting the hackamore on Eclipse and Eclipse kept shying away from Ike's hands. Ike stopped and asked Eclipse what was wrong and did he need a kiss. Then Ike - 6 feet tall, 200 pounds of stubborn cowboy - planted a kiss on that horse. Just in case, Ike said, "Do you want another one?" and gave that big horse another smooch. Only then did Eclipse let him put the bridle on.

Ike and Cheri have a granddaughter, Amber. (Tiffany stopped riding long enough to have Amber and got back on the horse right after.) Cheri brought Amber out to meet Eclipse one day and he reached out his head to her - bigger than she was - as slow and as gentle as I've ever seen an animal move. It was like he recognized his next prodigy. Apparently, Amber now rides him and bats away any adult hand that tries to stabalize her in the saddle. She must know the kind of gentleman he is.

This is one of Eclipse's recent students, Adrienne, before a cutting lesson. 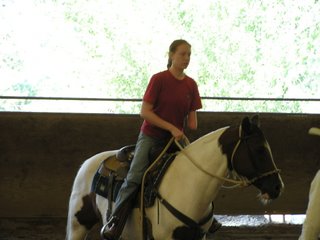 This is Adrienne after the cutting lesson. 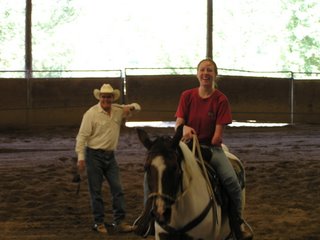 He is a master at what he does and a true ambassador to horses, to cutting, and to special spotty horses.
Posted by Jessica Boyd at 10:56 AM