Steve and Lena Rey
Originally uploaded by spottyhorse67
Posted by Jessica Boyd at 5:06 PM No comments:

Enjoying the grass on top of the ridge at Willow Creek Enjoying the grass on top of the ridge at Willow Creek
Originally uploaded by spottyhorse67
Posted by Jessica Boyd at 5:04 PM No comments: 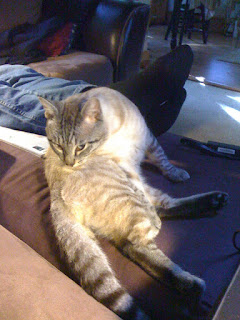 I think it is safe to say we have a "new" cat, though I'm terrified to jinx it after loving Wesley so much and having him disappear last year.

Elmer started showing up a couple months ago, and we don't really know where he journeyed from--though there is a sign at our local market saying he is a found cat (not by us) and to call "Jack" before "Jack" cuts off this cat's, um, parts. That maybe explains why he started showing up for meals, though he was incredibly skittish at first. Steve naturally got the first head scratch in, but Elmer soon allowed me to participate in the petting ritual.

Sometimes, when we'd open the door, he'd act like he wanted to come in, but you can't rush these things with cats. So one day, I sat down in the doorway and let him nose his way in, get a head scratch, check out the doorway, etc. I knew better than to shut the door behind him, though.

Every day he got a little bolder and a little more affectionate. And little by little, I started feeling like quite the cat tamer.

Little did I know how well I was being played.

Elmer now shows up at breakfast, then comes in to get his post-breakfast treat, settles onto the sofa for a nap while I'm getting ready for work, and then acts affronted when I put him out! Dinner is much the same, except after a power nap on the bathroom rug, he is ready to go out and do his rounds. He's nocturnal, you know.

He's quite the talker (must be the Siamese so obviously in him), especially when someone gets near the kitchen. But he also just likes to be around us, laying where he can hear and see the action,--sometimes right next to us, sometimes right outside the door where we are.

And, yes, Elmer is a tom cat, but so far has exhibited no bad behavior (e.g. spraying) and is too old at this point to stuff in a carrier and haul off to the vet to fix. Besides, he'd then disappear and I really don't think I can handle another cat going poof. All our gals are fixed, too, so--for now, at least--he gets to remain intact.

And we get to have a cat in the house again. Which is a gift I hadn't realized I'd missed as much as I did.
Posted by Jessica Boyd at 10:49 PM No comments:

Email ThisBlogThis!Share to TwitterShare to FacebookShare to Pinterest
Labels: cats

Time away from horses 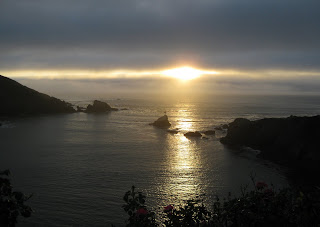 Occasionally, Steve and I do spend time away from the horses and we did just that last weekend--taking advantage of a break between storms to enjoy a trip up the Northern California Coast to Mendocino.

We needed time away from work and time with each other, and so we took the Miata, put down the top, and headed up Highway 1.

That car is perfect for that type of trip, even though some of us may have packed a tiny bit too much into the very small trunk. 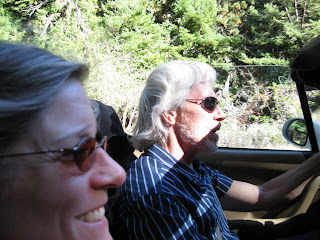 By Sunday, though, I was glad to be headed home (though not necessarily glad to be headed back to work). Katie had done house and horse-sitting duty for us, and worked both Friday and Saturday at her "real" job at Novato Horse and Pet Supply. She also got to drive my big green truck all weekend, which she loved.

I did get one horse fix (two if you count the tack store) while we were gone. We went by a stable that does beach and forest trail rides and thought briefly about scheduling a ride. We decided against it, but I did get to rub noses with a big spotty horse or two, and was content to leave it at that. We were, after all, only a few hours away from our own two ponies.
Posted by Jessica Boyd at 10:27 PM No comments:

I love the ocean-Mendocino Coast is beautiful this time of year. I love the ocean-Mendocino Coast is beautiful this time of year.
Originally uploaded by spottyhorse67
Posted by Jessica Boyd at 12:25 PM No comments: 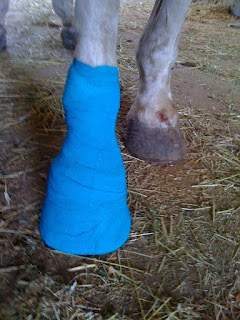 Well, the reason for the new experience isn't new. Lena banged herself up in the trailer (again) and so we've been bandaging her over the last couple of days. Katie has done a really nice job wrapping her foot, using diapers, duct tape, gauze, and vet wrap of course.

Tonight, I wanted to check the injury but when I got back to the barn after Steve and I had dinner, I discovered the power was out at Peter's.

Decisions, decisions. Leave it until tomorrow, or figure out how to do this in the dark. I didn't like the way the fetlock looked or felt, though--a little puffy and warm--so I really wanted to check it out.

Luckily, one of the other folks at the barn (also the new State Barrel Racing champ) was nice enough to turn her headlights on for me and help hold Lena so I could clean, tend, and re-wrap Lena's foot. In the dark. With minimal water because Peter's on a well, so no power equals no water.

But we got it done, cleaned, wrapped, and returned to her paddock nicely bandaged.

Just another day in the life of a horse-momma.

Thanks also to Mr. Jack's momma, for the help!
Posted by Jessica Boyd at 9:40 PM 2 comments:

Trail ride before the rain starts Trail ride before the rain starts
Originally uploaded by spottyhorse67

I know I should be glad that the first big storm of the season is
bearing down on us, but I am sad to see the probable end to trail riding for the year.

It was a good day, with only a couple mishaps. We borrowed Phil and Carey's three-horse and put Lena in first. She did her scramble thing and now I need to replace Phil's front rubber mat. Sigh.

But both horses did a better-than-expected job tolerating a long-ish drive to pick up Karen's horse, a delay while we got Ellie loaded, and having to be good, calm role models since it was Ellie's first time out!

I'm happy to report that even Bar surpassed my wildest expectations!

What a great way to (hopefully not, but probably) end the season.

New cat in the family 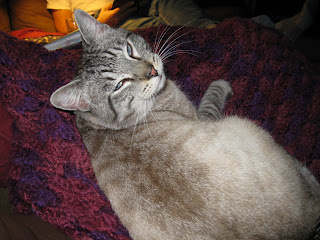 After Wesley disappeared, we decided to hold off on another indoor/outdoor cat--Steve said permanently, I figured awhile at least.

Elmer, however, has recently appeared and adopted us. He said it was apparent we needed the soothing presence of a cat "in da house."

Email ThisBlogThis!Share to TwitterShare to FacebookShare to Pinterest
Labels: cats 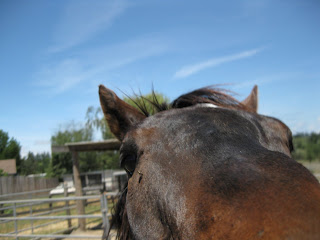 Trust is a funny thing--delicate, fragile, and easily shaken.

Both Bar and I have trust issues, but he has shown me over the last week that he's willing to work with me, even when he isn't exactly sure what I'm asking. That's a big (huge) step for him.

Now I owe him a little more of my trust, and I'm finding it bit by bit as I get on and ride him more.

His tolerance seems to have increased, probably in direct correlation to his confidence and--I'll give myself a little credit--the time we've spent and consistency of work we've done. Instead of taking advantage of my seat wavering out of balance, he slows down and lets me get back under control. Instead of flying off the handle when he can't figure out what I'm asking, he tries to do something familiar to see if that's the right thing. He even gives me his attention when he hears the grain cart go past, or when other horses go by--both former triggers for eruptions or even just grumpiness.

My friend Karen said her horse Bobby--also an ex-racehorse--was and is her best teacher. Lena Rey is an excellent horse and a tremendously gifted teacher and without her, I would never have been able to keep working with Bar. He, however, has taken my horsemanship to levels I never considered, and that don't appear to have a limit.
Posted by Jessica Boyd at 5:26 PM 1 comment:

Gotta get on and ride

I've never been a huge risk-taker, as far as physical things go. I have done risky things, sure, but usually because circumstances arose that made those risks necessary. Apparently, my self-preservation instinct is very well-honed--possibly too well-honed.

This thought process, and my ride today, led to this conclusion: The ground work is important, particularly as Bar gets his fitness level, balance, and confidence up, but I need to get up there and ride. For him, for me, for both of us to grow--him as a horse, me as a rider.

I need to push past the fear and trust him--and myself--more than I've allowed. Bar has given me every indication that he is ready to work with me and I've been too scared to accept it, to trust it. That means we're both missing out on the relationship we could have, not gaining knowledge and skills both of us need.

That's not going to get either of us anywhere and today was a prime example.

We were forced to use the outdoor arena--or give up and not ride--so down we went. I worked Bar in small circles around me, letting him come in for a second before sending him back out the opposite direction he'd been going, until he circled at at trot consistently before being called back in. This is hard for him, though I don't yet know why. Then we did pivots around his front end and side passes, just to be sure he was loose and paying attention.

He was, which meant no more excuses for me.

I was so stiff, so out of balance, and Bar never once took advantage of it. He kept at it, responding to leg cues that weren't great, and accepting my truly horrific attempts to post with relatively good humor.

I'd laugh, if I didn't feel so much like crying.

Steve asked me what I'm so afraid of. It isn't even so much getting hurt--though there's no denying that thought floats in the back of my head--it's the risk of sliding backwards with Bar, of having another accident that sets us all back to square one.

But that risk exists no matter where we are in our training, so it's not a good reason anyway.

It's the right path, though, for learning, for growing--for Bar, and for me.
Posted by Jessica Boyd at 4:54 PM 3 comments: