What do you mean this isn't a buffet?

It sure looks like a buffet to us, silly humans!

Bar waiting for his post-ride carrot and massage Posted by Jessica Boyd at 5:10 PM No comments: 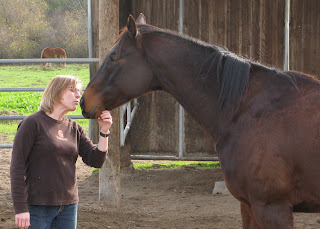 I heard recently, in a video we watched in my Equine Science Survey course, that the rise of natural horsemanship coincides with a few things that have happened since the turn of the century: more women becoming involved with horses and horsemanship, principals of psychology being more widespread, and a higher level of education in today's average horse owner.

All of that makes a lot of sense, and helps explain the phenomenon of the Parellis, Monty Roberts, Clinton Anderson, and any other number of trainers and clinicians that are out there today.

But the really interesting thing for me is how much of a difference listening to my own instincts--now with some affirmation, I admit--has made with Bar.

Owning a horse has been a life-altering experience for me, but one of the things no one warned me about was how much advice would come crashing down on me from all sides. "Use a stud chain on him!" "Use a tie-down." "Use a xxxx bit, that will slow him down." And every time I tried something harsher with him, all it did was make him fight it more, make him more upset, and more likely to take off. But I tried them all, despite the nagging sense that it wasn't the right thing for him, or for us. Now it's possible he knew I wasn't right with the tools I was using and took advantage, but it's also perfectly plausible that using the harshest method first is not the right tactic--certainly not with horses like him or Lena.

There is a balance, of course. When we first got Bar, he was a bad biter and there was no nice way to explain to him as we got to know each other that biting is not acceptable. Another horse would bite back, so a smack on the nose was the best response until we could work on the psychology of why he was biting in the first place. One of the pieces of advice I got was to never give him treats by hand and never let him be at all mouthy, but I could tell he knew the difference. So I reward him when he isn't shoving his nose in my pockets, when he doesn't snatch a the carrot, when he uses his lips instead of his teeth. Now when he really wants a carrot, he turns his head away from me or does a stretch between his front legs. Well, sometimes he gives me a smooch because I also taught him that, but giving him the opportunity to do the right thing--once we established that biting was the absolutely wrong thing--allowed him to be a better horse.

He and Lena both respond so much better to positive reinforcement and redirection of their energy. I've written before about setting him up to do the right thing and I have watched it build his confidence in himself and his trust in me to the point where he checks in with me nearly every time something starts to get a little out of control.

My challenge? Trusting myself and my own riding abilities and staying with him, allowing him to be exuberant and playful while on his back, as much as I do when I'm on the ground.

If I could transfer the trust and confidence I feel between us on the trail into the arena, that would be a magical thing.
Posted by Jessica Boyd at 7:06 PM 1 comment: Links to this post 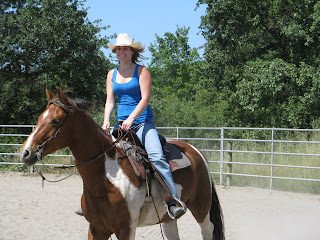 So nice to see Katie back up on a horse these days. She is also socializing a lot more, which--since it's her senior year--is a good thing. She and Lena both looked relaxed and happy, I am almost sorry I rode Bar instead of taking pictures of them. Almost, but not quite.

We tried to beat the heat today, but I have to say that 11:00 a.m. wasn't particularly any cooler than 3 p.m. Maybe if we'd gotten there at 8 a.m. we would have done okay, but that was a little too much for a Sunday morning.

I completely changed Bar's routine today, and he handled it pretty well. He doesn't like lunging outdoors in the arena on the short (14 foot) lead--versus inside the round pen on his own recognizance--and he started to argue, but he did finally settle down and pay attention. While I was saddling him, he got very concerned about the sounds of Peter giving a lesson in the indoor arena. I promised him that was not what was in store for him, but he wasn't sure he believed me until we got all the way into the outdoor arena with Lena, Katie, Daisy, and Cindy. With the gate shut. And latched. Then checked with a nose, no less.

We just did a lot of walking and reacquainting ourselves with the outdoor arena. He and I have not been in the big arena, with him under saddle, in quite some time, so I had some nerves to overcome. Okay. A lot of nerves. Big hairy, oh-my-gosh-I'm-a-little-terrified nerves.

BUT. We did it. And he was good. He kept it together even when Lena left and he was still stuck with me in the hot arena while she wandered away up the hill then back down for her bath. I concentrated on sending him "it's no big deal" vibes, and I think that helped, too.

We worked on my body position and him responding to my body position, going over obstacles, around a pole (he's better to the right than to the left) and just listening and sticking with me and not going ballistic, even though he was a little bored.

I'm sure it helped that it was hot and he was feeling lazy, but even when he'd start to think about blowing (and I've gotten better at telling when that's about to happen), I'd just settle into my seat, talk to him, and redirect him into something else and he'd move past it.

At the end of it all, I got to tell him he was a good boy and had listened well. He even opened the gate, though closing it is still a work in progress. "What? Why do we need to close it?"

I know. It makes no sense that I'm scared to ride him with a bit, bridle, and saddle when I hop on him most nights with just a halter, looping the lead rope around his neck as reins.

I guess it comes down to this:

Bar and I are figuring things out. It may be slower than if I got really tough with him, but I'm in it for the long haul anyway, so I might as well work towards the relationship I want with my horse rather than worry about time lines or deadlines. My commitment is to him, and to myself. I like this horse--love the challenge, love his mind, the way he moves, and how hard he does try to learn things. I am willing to invest the time and energy to figure out how to get us (yes, me, too) where we need to be so we end up there together.

Besides, he's just so darn awesome on the trail!
Posted by Jessica Boyd at 6:18 PM 1 comment: Links to this post 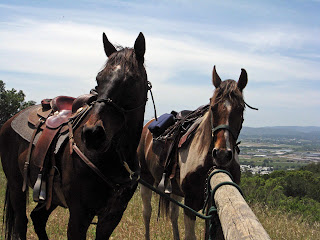 It was a beautiful day out there yesterday, and even though we got a late start, we headed out anyway.

And I am so glad we did.

First off, getting the trailer out was good because there were 5 (five!) small wasp nests inside--one wasp each--and would have surely been larger wasp nests in a few more weeks. Steve took care of them quite handily, though, and we were on our way.

We went to a familiar spot--Shiloh Regional Park--and the horses seemed to recognize it.

Bar handled everything tossed at him--being separated from Lena (only briefly), little kids, other horses, Lena flirting with the other horses, and even Lena spooking at terrifying logs. He was much calmer and more responsive to me, and I think a lot of that has to do with the work I've been doing with him, so that feels pretty good.

Lena had the amusing prize of the day when she decided to try to cut geese. Yes, geese. She went into the flock looking a lot like she wanted to separate one of them from the others. We figured that counted as harassing the wildlife, though, and didn't let her get too carried away.

Sorry my picture isn't so great. I got the lighting and the camera setting not quite right. Oh, well. It was still a glorious day and a really great trail ride.
Posted by Jessica Boyd at 9:44 PM No comments: Links to this post 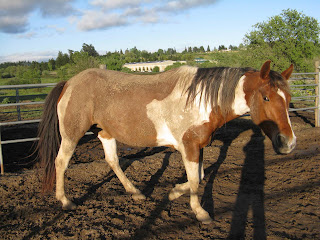 My horses are enjoying the mud -- Lena more than Bar. Bar looked like this the other day, but only after rolling his rain-slicked body in the round pen. I told him he looked like a cocoa-dusted chocolate cookie. Lena just looks cocoa-dusted and beautiful.

I love the close contact we get with no saddle, and he seems to like it, too. He responds to weight shifts and just meanders around with me up there as if it's the most normal thing he's ever done.

Maybe it is.
Posted by Jessica Boyd at 9:44 PM No comments: Links to this post