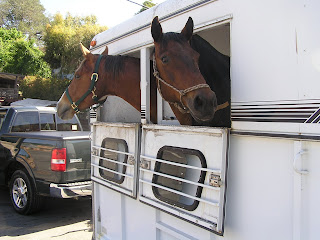 I finally got to experience the Doc and Lena show last weekend, and I have to say she's a much calmer horse when she has a buddy. And Doc is a great trail horse, as well as a nice calming influence on the dancing spotty horse.

Yes, I know. They are herd animals, of course she's better with a friend, but I don't think either of us realized how much better she would be.

We took them up to Armstrong Woods and on a pretty challenging trail. Doc chugs along like a compact little tractor and Lena was just happy not to be crossing drainage pipes by herself.

Sometimes she would go in front and sometimes Doc would - it depended on how unfamiliar something looked to her.

We got down to the picnic area and had a snack, and Doc got a massage. Lena was too busy sniffing and looking around, though she did let me work on her a little and stood mostly patiently while we ate. Mostly. 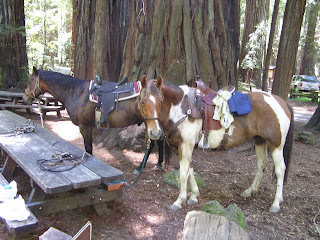 One of the really interesting side-effects was how many people came up to us and asked about the horses, asked if they were ours and wanted to know about them. One woman - after checking with us and watching Lena for a minute - picked up Lena's front foot to show her young son how big and heavy those feet can be. Lena was cooperative and calm, even though she and Doc were both anxious to get on the trail.
Posted by Jessica Boyd at 10:12 AM

How can you tell when Lena and Doc are anxious to get back on the trail? Also, Lena must be ok with strangers if she would let someone new pick up her hoof. Sounds like Lena really likes having Doc along. The next few times should be interesting.