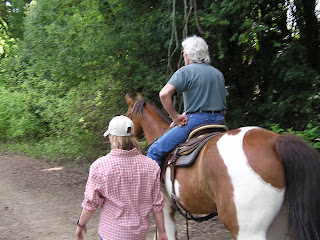 We took Lena out to the same place we went the first time - mainly because it's an easy enough walk for the person not riding, which was good for the gimpy one in the group.

She was not, however, as well behaved as she has been previously. There was much dancing and prancing and trying to turn around and go back the other way.

On our way out, we ran into Diana Thompson, the instructor of the Equine Massage and Accupressure class I'm taking this semester at the JC. She even did a little accupressure on the dancing horse, which did help somewhat, but it's hard for an only horse some days. And today, it was really hard. There were two other groups of two riders and horses each, and Lena seemed to think that perhaps she was missing out on something.

At one point we had to have a discussion about how scary a log is. She went over and sniffed it, it moved, she spooked. So I went over and wiggled the log for her benefit. As you can see, she was not necessarily impressed. 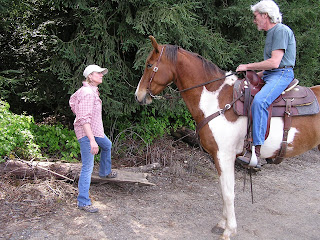 It was not the smoothest ride ever for either Steve or me - and Adrienne came along as the photographer and assistant hiker - but by the end, Lena did manage to calm down a little. A little. 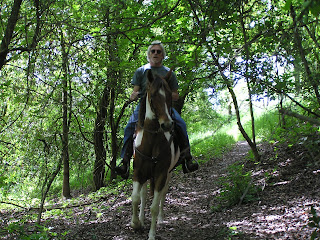