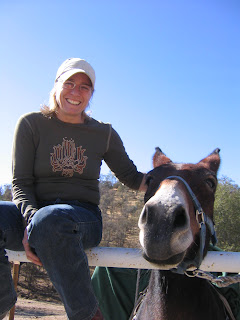 I finally sat down and put a series of pictures together. Some of them were taken by Tammy Ybarra, our instructor's wife, and some by me. She took the shots of us pulling and tying all that rope -- since our hands were busy -- and the one above of Four-by-Four and me.

Click here to see the set of pictures.
Steve and I are both trying to retain what we've learned and find ways to keep the rope patterns in our heads until we can get some way to practice.

In the meantime, we are riding Lena and figuring out where we go from here. Obviously, we'll need at least another horse and probably some more tack and gear. (Yay!) We also need to work with Lena to get her less spooky and more able to deal with weird things we might encounter. Like scary blankets and tarps, for example. Not to mention mules. She might wonder why on earth these fine large-eared critters seem to want to follow her everywhere.

Steve Ybarra kept telling us that the more we can expose her to, the better, so we'll be working with her on new things, trying to make her as trail-worthy as we got our loads to be by the end of the class. Mostly, she's pretty good at learning. Sometimes, though, it depends on her mood. And the weather. And the full moon. And any number of other factors that are involved with having a horse.

One of the many things that make owning Lena worth a lot, actually. She's a good - if sometimes goofy - teacher.
Posted by Jessica Boyd at 7:36 PM