Lena gets a massage 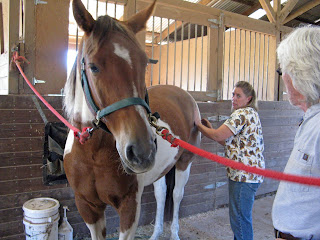 A month or so ago, I noticed Lena's left "hip" felt warm to the touch. It was after a ride my daughter and I took at Lake Sonoma, when Lena was particularly rambunctious in the trailer--banging back and forth into the divider and scrambling bad in the front slot. It was also after that same ride that Steve and I got the call from Peter that he thought Lena was colicing. That makes me think she was laying down to soothe her hip, not her belly.

We watched the area and noticed some days it would get sweaty, even if she wasn't hot anywhere else. We kept it rinsed and clean, thinking maybe it was a skin irritation and that seemed to help, but it wouldn't go away. Lena wasn't lame on it and showed no real sensitivity to pressure (and believe me, I poked and prodded a lot), and the vet didn't see anything when she came out to do shots a couple weeks ago either.

It was quite baffling and starting to worry me more and more every time I got to the barn and saw it wasn't getting better. Mind you, it wasn't getting worse, either, but not being able to figure it out was aggravating. Peter suggested it could mean she needed an adjustment, so before I started the search for a horse chiropractor, I called our friend Karen the masseuse to come out and see what she thought. 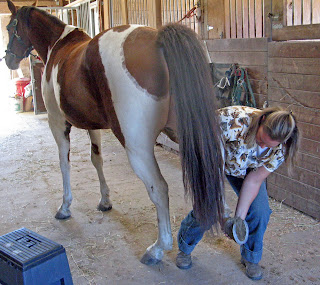 Karen started with stretches, then worked her way down each side, starting at the shoulder. Not the world's most patient horse, Lena danced quite a bit, but she did let Karen do her work. I think that means it felt good and was helping. 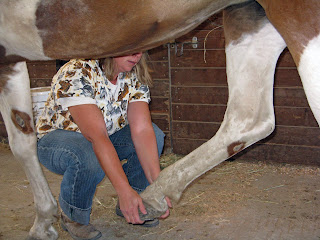 Karen doesn't think we need a chiropractor yet, and is going to come out again while I'm gone to do another session to be sure. I noticed a change even before I got on and rode her. Lena looked more relaxed and her hip and the muscle on that side looked more "right" (for lack of a better term).

Karen worked a lot on Lena's hind quarters and up on the lumbar area, resulting in some serious head-shaking and yawning on Lena's part. Those are good symptoms and it looked like Lena released a lot of tension during the whole process, so that was a bonus. 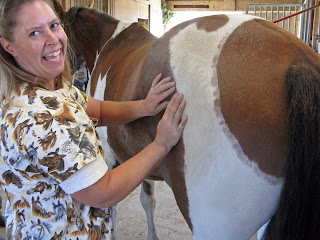 We have things to watch for, like how she's standing, and things to do for her to help the healing along like stretches and some pressure points to hit a few times a week. Steve is in charge while I'm gone, but since he does a fine job whenever I need a massage, I'm sure he can handle his spotty horse, too.

I will admit to feeling guilty that I haven't given Lena the same amount of attention and massage she was getting before we got Bar. I promised her I'd try to do better when I get back from this trip, at least until I'm sure she's healed.

And for the folks who tease me about my horse getting massages instead of me, I do see my chiropractor once a month in order to stay somewhat symmetrical in the saddle. And I don't have even carry non-symmetrical yahoos on my back all the time!
Posted by Jessica Boyd at 5:31 PM