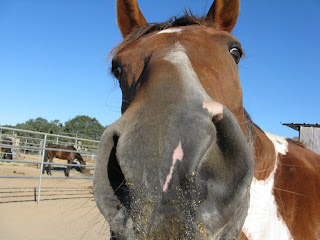 It's been awhile, I know. I've been on the road for a week so far, first at Maker Faire Austin, and now in NYC (again) for a week for Photo Plus Expo.

So, here is a quick update on the horse and cat front.

I did connect with some horse slobber in front of our hotel in Austin. His name was Rowdy and he was a huge black Clydesdale who was ready to get rolling with his carriage full of little girls (and their parents), but let me scratch his neck and pat his nose first.

Lena is doing well and seems to be healing. Karen came out last week and said her muscles felt much looser and no more treatment is needed for now. Karen wants to go on a trail ride with us because the last time she took her mare Ellie out, Ellie acted just like a Thoroughbred and scared the woman Karen was riding with too much. Since we ride crazy horses, we may be a better set of trail partners. Of course, we may end up with a race on our hands, too.

Bar managed to lose Steve in the big arena on Sunday, then proceeded to buck, fart, and take himself over the jumps before settling down. Apparently, it caused a bit of an uproar at the barn. We think riding him more often is probably the best solution, though he may not agree.(At least at first.) I like to do a lot of ground work with him before I get on, too, because I think it helps. It doesn't always take the fire out of him, but it usually gets him a little more focused and in tune with me.

Katie D. had a horse show in LA right before that. I know she and Willoughby did really, really well and there were neck ribbons and everything! She was really happy with the way they performed, but I'll let her elaborate.

Lastly, we still haven't seen Wesley. He was in the house snuggling with Steve and me the Friday before I left and that was the last we saw him. We've checked the neighborhood and called and called, but it's been over a week now and we don't think he's coming back. I like to think he found some nice person who stays home with him all the time and feeds him steak. Wherever he is, I'm glad we had him in our life, even if it was for only that short amount of time. Mostly I don't think about it too much because it makes me so sad. I've been dreaming of him coming home since I left and have that brief hopeful moment when I wake up, only to realize seconds later it was only a dream. Bah.

And now I'm off for my first NYC subway ride, meeting up with my aunt and uncle and doing a little bit of shopping for warmer clothes! NY is a bit cooler than Austin was and I could only pack so much in my poor suitcase!
Posted by Jessica Boyd at 7:42 AM

I'm sure it's not all that funny in reality, but I sure get a good laugh over lines like, "then proceeded to buck, fart, and take himself over the jumps before settling down."

Animals wouldn't be any fun if they didn't express their opinions once in a while.

Ha! Yes, it is not always funny, but bucking and farting are indeed amusing when you're watching it from the safety of the ground. :)

Luckily, Steve wasn't hurt and Bar seems to have settled out a little bit. At least today. :)