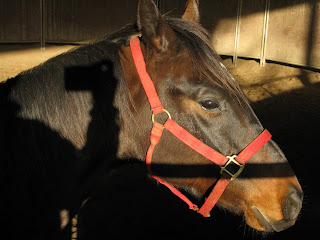 I've been researching training techniques, trying to find new tools that will help me work with Bar without resorting to either one of us throwing temper tantrums. Me stomping my feet and losing my patience really is not an effective learning environment, you see. I found some tips from Clinton Anderson that made a lot of sense to me, and today they helped Bar pay better attention and gave me a little reminder of some horse psychology I'd forgotten. In other words, Bar got the benefit of a little owner re-training.

I think that body language and tone of voice work for getting him to pay attention, so I concentrated on being "bigger" with my energy today. And it worked. I kept his attention and got his cooperation without having to resort to the stud chain, simply by keeping his feet moving forward when he tried to rear and backing him up away from me using my body and tone of voice when he tried to crowd me.

Most of this lesson was before I even got him into the round pen. Bar heard Lena and Steve going down the driveway to cool down after their ride and started dancing and crowding me. I worked him around me in circles at the end of a longer lead rope, then give him a chance to walk calmly and when he wouldn't and tried to rush me instead, I'd get in front of him, facing him, and march him backwards. When he'd stand still, I'd stroke his neck and tell him he was being good, even if it was just for a second.

After a few minutes on his own in the round pen, with me peering over the side and him working out his kinks, he would do a circuit then stop next to me and wait, finally pushing his nose through the top of the panel to nuzzle my hand. I took that as my cue to go in and we worked together for a bit, ending with our normal routine of stretches and ground work.

His focus on me was better and even when he would stop to check out something else going on outside the arena, I could get his attention back on me quickly--and keep it. The big test came at the end, after I went to lead him out the outside door of the arena. One of the newest boarders was walking her 5-1/2 year-old Thoroughbred down the alley and Bar really wanted to check this out. Especially when he saw Steve stop to pet "Romeo." I made him wait until Romeo was not only past us, but on his way down the driveway, before I opened the gate. Then I made him stand and wait for me to move forward. He did, and not only did he not argue, he looked to me for direction. Woo!

I told Steve when we got home that it seemed to me that, much like dogs, horses like to know you're in control of the situation. Duh. It's not even that I don't know this, I just forgot for a little while. Bar was able to relax and give control over to me because I took control and he didn't have to be in charge for a little while.

So, we both got some training (or re-training) today, which makes it much like most days when I'm actually thinking about how to best work with him, rather than worrying about how other people think I should be working with him. Best of all, I didn't feel frustrated--fighting him to stay barely in control--and we could relax and enjoy each other. That's a huge reward. For both of us.
Posted by Jessica Boyd at 5:07 PM