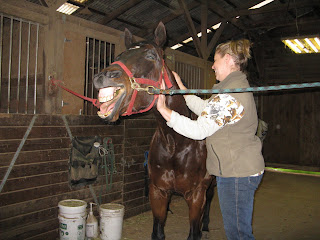 With Bar's recent behavior being, oh, less than angelic, I wanted to be sure there wasn't anything physical that could be causing him to act up so I had our friend Karen the masseuse come out to check him out. Not only is Karen an excellent masseuse and horse woman, she owns two Thoroughbreds of her own and has worked with horses on the racetrack for years. She's also known Calabar for a few years and is familiar with his moods and personality.

On the way to the barn, I found myself worrying both that she would find something and that she wouldn't--not even sure which concerned me more.

As it turns out, my boy is very healthy and very happy, and therein lies the problem. He's fit, very fit, and very full of himself. I grumbled briefly about ignoring him for a little while, but knew I didn't mean it. Plus, I think that's kind of what got us here in the first place. We got into a routine where he was getting worked regularly, then winter and busy work schedules intervened, and, well, him acting up is the recent result. 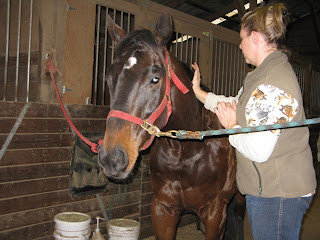 He enjoyed most of his massage, though it was hard for him. He does not relax well, which is typical of Thoroughbreds in general and him in particular when it comes to being handled. (Unless you're brushing out his tail, for which he will patiently stand still longer than I've ever seen him do for anything else.) His nuchal ligament was tight and Karen worked on it a lot. She also did a lot of teeth-avoidance techniques because it was not necessarily comfortable for him to have her make it less tight. He did better when she worked on his back and enjoyed all the work he did on his lower legs and tendons. Karen said his bowed tendon looks and feels really good, too.

He did give her big yawns and even relaxed enough for me to hold his head and stroke his forelock a few times if only for a few short seconds each time. Lena watched attentively from the corner of her paddock, possibly worried about him, but more likely hoping (probably assuming) she was next. 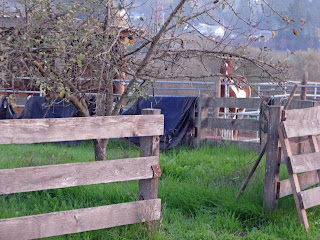 Just to be clear, here. I love Bar's energy level. He is who he is and that means a certain level of buzz at all times. I don't want to kill it, I just need him to pay attention to me and his surroundings so we can work together in a safe manner. Shoot, we can trot uphill for days as long as he's watching where he's going and listening to me, but right now, I'm not sure I feel confident enough to take him out on a trail because he just seems a little out of focus. Though maybe a trail ride is just what he needs, I don't know. (Alas, the perennial burden of not being independently wealthy and owning acres of property right on the border of a park full of trails.)

So for now, I have resorted to using the stud chain again as a back-up measure. While I appreciate his exuberance and energy, I do not want to get hurt if he rears or dances--even by accident. I don't start with it on him--giving him the benefit of the doubt--but he knows it's in my pocket at all times, and if he starts up, I pull it out and put it on him. I never need it once we've worked, though, so I know a lot of it is just his energy level. Steve hasn't used it, yet, but he has more strength and mass than I do.

I was hoping to ride today, but the both arenas were full so he and I had to be content with walking up and down the driveway, ground work, and a little exercise in the round pen. After some initial dancing in the driveway--in his defense, some of the horses in the pasture were running amok--and eventual employment of the stud chain under a bit of duress from fellow barn mates, he gave me a wonderful session in the round pen without longe line or stud chain. Karen will be glad to know his head position was much better today, too. He listened, changed direction, and stopped when I asked. He pivoted on his front end and backed without me touching him, and followed me at a constant distance off-line as I zig-zagged around the round pen.

Then, just to show off in front of the folks in the arena, he let me lead him back up the hill to his paddock without the stud chain, never once trying to get ahead of me.

I get a lot of advice with him, and some of it is good, but sometimes it distracts me from focusing on him and what he and I need to do. Especially in the middle of a tantrum, that can be counter-productive. At least for me it is; he is usually looking for a distraction/excuse at the moment I'm disciplining him. Losing focus because I'm trying to listen to someone else is probably not what I need to be doing right then, but that's my challenge to figure out, not his.

I am glad he is fit and healthy, that his body is strong, balanced, and well-muscled. He does look beautiful and he seems to be a very happy horse in all regards. We just need to do some work on when and how to express his joie de vivre so we can get back to having fun and not arguing all the time.
Posted by Jessica Boyd at 5:38 PM