Horses get some non-arena time

We haven't been out since the yellow jacket incident, mainly because Katie has been too busy with a new job and Steve isn't quite ready for the road, yet. This has lead to a lot of work in the arena for both horses, and Bar has recently expressed a certain amount of boredom with the round pen. How does he express his displeasure? Not the way he used to--thankfully there is no longer any rearing--but by stopping at the top of the hill on our way down and looking at me like he really can't believe he has to work AGAIN.

I can always convince him to go along without too much effort, and his whole body is already in much better shape than it was, so the training is helping. We just have to get creative and toss in some different activities to keep things interesting. Since Lena could use some attention, too, an every-other-day schedule might work best anyway. 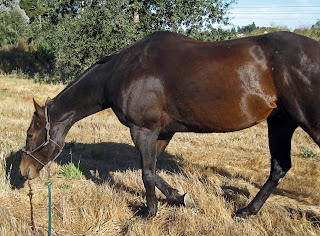 Yesterday there was no round pen, no boots, just his halter and a walk together down the road to the apple orchard. He is so curious about everything--patches of darker asphalt, gopher holes, short and stubby apple trees, and mules. The barn next door to ours backs right up to the bike path and several of their mules came over to say hello to Bar. He thought they were very fascinating creatures indeed and wanted to hang out and interview them further, but his human was melting.

Today, we headed down to the indoor arena while Steve and Lena worked in the outdoor arena. Bar was acting jumpy--though it could also have been his human acting jumpy--so we started with ground work in the round pen with his saddle on. The last time we tried this experiment, it was wholly unsuccessful, but it went much better this time. No bucking or trying to roll or freaking out because the stirrups were hitting him or the side of the round pen. In fact, he looked pretty comfortable. 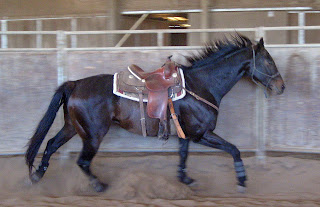 Well, when he wasn't pretending to be a racehorse again anyway. 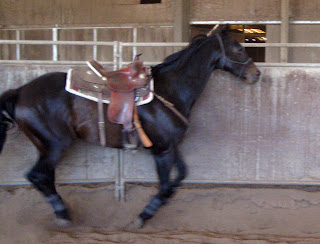 Though the plan was to do some slow work under saddle in the arena, going down the driveway and back to the orchard with Steve and Lena seemed like a better idea. Bar agreed completely. 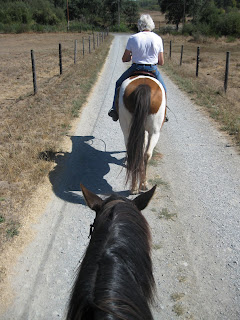 So we went down the driveway, down the road, jumped the gully into the orchard (that was exciting), and went to visit the mules again. 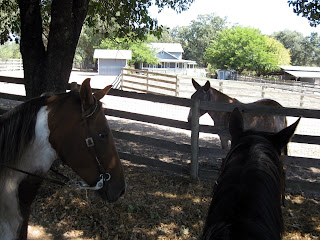 Bar is very careful and concerned with his footing and the loose, often gopher-holed, ground in the orchard makes him a little nervous. But he picked his way through the apple trees out to the bike path and up behind our barn. When he realized he was looking up at our arena, you could almost hear him say, "Huh? I know that place!" We tried to go back in the back gate, but can't remember our combination, so with Steve a little weary and sore, the four of us walked back to the barn. 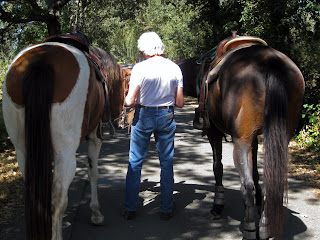 Not too bad a way to spend time with three of my favorite beings.

(Note to the one bicyclist who--unlike the many other cautious and respectful cyclists we met--zoomed up behind us with no warning: You're only lucky so long.)
Posted by Jessica Boyd at 6:07 PM

Nice to get out and around - sounds like a great ride! That bicyclist - some people just have no common sense, for sure.

Time well spent! Can't think of a better way to spend it, then out on a ride.