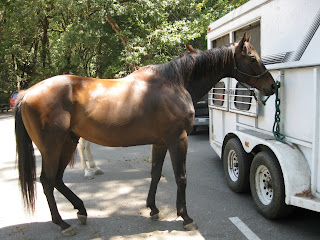 I love my big brown horse, truly I do.

And he terrifies me at the same time.

I know, logically, that so much of this is a confidence issue. When we first got him, I would get right on and ride him and he would respond in kind--by being easy-going and ride-able, most of the time. It wasn't that I was over-confident, it was that I didn't think about what could go wrong. I assumed that he, like Lena, would take a certain amount of care for his rider.

But he didn't, not then, and each fall, each accident, eroded my confidence a little more, until the simple act of getting on his back at a walk (only in the arena, mind you--the trail has hardly ever been an issue) sometimes took all the courage I could muster.

I feel wimpy sometimes, like I'm not pushing myself hard enough, and maybe that's true. But I can only do so much without it feeding back into him and starting our own special little feedback loop. "Oh!" Bar says, "You're worried! Why are you worried!? Should I be worried, too? YES! I should definitely be worried, too!!"

I rode him Friday, after working him in the round pen in his new English saddle, which fits him perfectly, and he was great. He did what I asked him to do, even when I didn't ask clearly, and responded to every muddled cue as best he could without getting agitated or grumpy.

I am still afraid to ask him to canter.

He is finally giving me a nice relaxed canter doing our ground work in the round pen. After his fall with Steve, he would not canter without argument or with ease-not until this last week. He looks magical. Comfortable, smooth, relaxed. And he transitions beautifully back down to a trot, too. (And from there to a walk, I might add.)

Today was the first time I cantered him in the saddle in weeks. (In the English saddle, I might add.) It was also the first time he and I had been in the outdoor arena with him under saddle since the accident, so tensions ran a little high on both sides.

He did great. If I'd been relaxed, we would have done better, but all in all, we did okay. He responded to my cues, was paying attention to me--despite my oh-so-obvious-anxiety--and didn't try to dump me when he felt me get out of balance. (Something he has been known to do in the past to both of us.)

I didn't work him hard. I didn't do all the things that would have been good for both of us to do. But I got on that horse in the outdoor arena when I could very easily have unsaddled him and given up for the day.

I think I'll go for the latter.
Posted by Jessica Boyd at 4:48 PM

It sounds to me like you both did great - don't worry too much about the details - they will come. The most important thing is to take things at a pace you find comfortable - who's checking, after all? - and to enjoy your time together. I have my own fear issues, and I expect many of us do. Focus on the positive, as you are doing, and build on that!

Jess,
Looks like you're doing the right stuff, pushing yourself closer to the edge of your comfort zone without crossing the line to being outside of that zone. You and your boy need to build that confidence in each other slowly. Took Cowboy and I about 4 years, then really noticed the breakthrough this year. It makes a world of difference to get that good foundation built! Keep up the good work.
Joan