Forrest gives us a scare 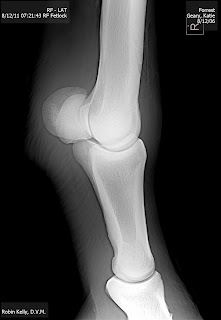 Horses have the reputation of being, well, horses and hurting themselves doing dumb things.

We have had a few minor instances with Calabar and Lena, but Forrest did a good job Friday of reminding us all that sometimes horses do goofy things and pay the price for it. Of course, Katie had to pay the price for it, too. She's going to be working to pay off vet bills for quite awhile--with the joys of horse-ownership come glorious pitfalls as well.

The day ended normally enough, even on time for once. I was packing up to leave the office when my phone rang. Steve told me Forrest had gotten hung up in his gate and opened up his fetlock badly enough that Peter thought we needed to call the vet. Peter is not an alarmist, not by any stretch of the imagination, so when he says to call the vet it's time to call the vet.

I called and texted Katie and headed to the barn to see what damage had been wrought.

Forrest had been pawing while waiting for his grain and managed to get his fetlock joint caught in the lower inside corner of the gate, right below the hinge. The hinge wedged it in so well, Steve couldn't pull it free and neither could Peter. This naturally led to anxiety and struggles from Forrest, until he fell backwards and managed to pull his leg free himself. It probably wasn't pretty, but at least he was free. By the time I got there, his right front fetlock was bloody and swollen and he was lame on the leg.

Katie got there and we called our vet only to find she was away for the weekend. And why is it that horses don't hurt themselves during regular business hours, anyway?

Leslie had, as always, left the number for a substitute who told Katie to cold-hose the leg while we waited.

Because of the type of injury, how it happened, and where it was, the vet recommended an x-ray to rule out any severe bone or joint damage. I'd have taken pictures of the cool set up, but I was wearing my own lead apron and holding Forrest at the time. Plus, Katie was afraid the news would be dire and didn't really want photo documentation.

Dire would have been if there had been severe bone damage (there wasn't), or if the joint had been damaged (it wasn't), but x-rays and then a joint tap gave us good news. The options for treatment had there been separation in the joint or significant bone damage are too expensive for us to consider, so Forrest could have ended up as a very young pasture ornament. Luckily and to all our relief, he has other things in his future. Like daily leg wraps, four weeks off, including at least one week of stall rest.

Forrest says he was framed and when can he come out? Jail is no fun! I told him it was his own dumb fault, so suck it up. 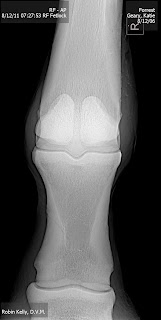 The plus side is his fetlock joint in general is in fine shape--especially for a horse off the track--and I got so see some really cool field veterinary technology!

Pets (and our horses are definitely pets) are wonderful and add so much to life. They do, however, sometimes take big chunks out of your wallet in the process. That is part of the lesson, part of the responsibility.

Oh dear! Horses sure know how to give their owners a scare.
I'm glad Forrest was okay though and his injury wasn't too bad.

Good news there was no major damage! I swear, we could wrap them in bubble wrap and keep them locked in a padded stall and they'd STILL manage to damage themselves!