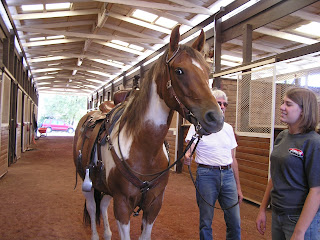 Steve, Katie and I took Lena up to Healdsburg for some cutting practice today. See? She's wearing her cutting saddle again. :-)

She - again - loaded fine and we let her ride in the back part of the trailer today since it was just her. It was a balmy 102 degrees when we got to Healdsburg, so it's good it's a short trip!

We unloaded and she checked things out as we led her into the barn to tack up. Mostly - except for a little chewing on the wall in front of her - she was pretty calm. Must have been all the correctly-sized horses she saw. (i.e. cutting sized.)

We warmed up in the outdoor arena, full sun of course, and across from the Dun stallion on the property. Initially, Lena ignored the Dun but finally noticed him when he whinnied at her while I was doing circles on her at his end of the arena. The first horse she really noticed was a Friesian gelding, Mister tall-dark-and-handsome-with-great-hair. Below is her noticing him. There was also a Friesian stallion there and both Katie and Steve introduced themselves to him. I'm not sure the world is ready for a spotty Friesian, but Katie and Steve already dubbed it "Legs." Sheesh. 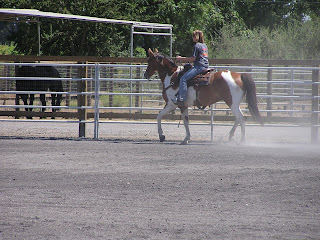 Meghan - the woman I coordinated with and pictured below - has a beautiful palomino gelding named Hollywood. We worked with a trainer up there named Rob Ringrose who was riding a nice little sorrel mare he called "Shorty." 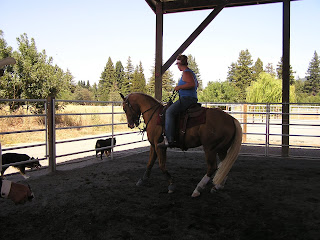 Lena was definitely the moose on the block, but she did an awesome job after a little initial trepidation about the flag. It flapped, don't you know. She moves so fast and she's so aggressive that even when she would get beat on turns - mostly rider error - she could catch up. 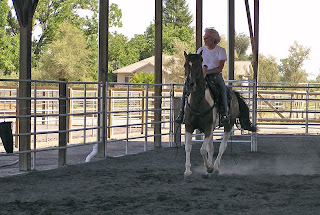 Most of my cutting pictures are of Steve and are dark and crooked - as is often the case indoors and with me shooting. The one above is the clearest, but I'll work on the others and post them later. We all got at least one try with Lena - Steve and I got two - and Katie got to try Hollywood and I got to try Shorty, too.

It was a blast. And Lena enjoyed it, too, which is always cool to experience. It was was the first time in a long time that I've seen Katie enjoy riding, which was also pretty cool. 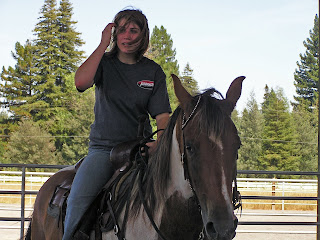 Lena looks all business in the first picture. You said it's the first time in quite awhile that Katie has enjoyed riding. I didn't know she wasn't enjoying it. What happened?