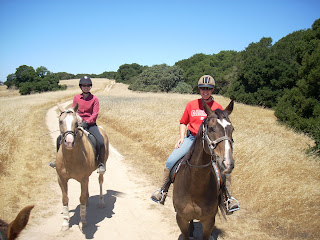 On Sunday, Katie D., Karen and I went out on a trail ride. This involved not only coordination between the three of us but me taking my first solo journey with Lena and the trailer!

I got to the barn ahead of Steve and even managed to hook up the trailer all by myself. It just takes a little longer and a bit more patience - and a lot more getting in and out to see where your hitch is positioned.

Lena loaded fine, though she really - really - doesn't like the front compartment. Too narrow, though it's not really. We immediately found out what it was that would make the trailer rock so much when we put her there in the beginning. It wasn't tricky, just the natural physics around 1,200 pounds of horse slamming back and forth between the front wall of the trailer and the divider. But, since I was picking up Karen and her horse, she had to be in front because I was *not* unloading her and reloading her at a strange barn.

So I drove through Sebastopol, out Highway 12 and onto 101 South all the way to Petaluma without running myself - or any of the other idiot drivers out there - off the road. Why people getting on the freeway dawdle is beyond me. No, I'm not hitting the brakes with 1,200 irritable pounds of animal behind me, so GO for crying out loud! 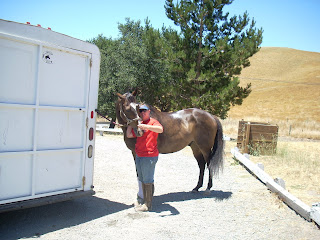 Karen's horse Bobby is an ex-racehorse and so much like Lena it's a little scary. I took one look at his head and realized why people don't think Lena has any quarter horse in her. Because she looks like a spotted thoroughbred, of course. There were some definite dominance squabbles between them that are not quite ironed out, even though she thinks he's totally adorable and wonders why he doesn't want to nuzzle after she struck at him. Nothing like a horse playing hard to get. Especially when you're between them. Oops. No major injuries, thank goodness. 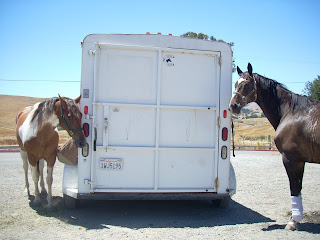 Above is a picture of her peeking around the back of the trailer at him - since we couldn't actually tie them up next to each other or anything silly like that. 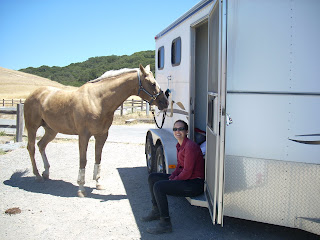 Katie brought Bee and he had a blast. He had gotten relegated to second horse status when she had Fenway, but since she is between show horses at the moment (a story for her to tell), Bee got to go out and be an only horse. He loved it. Lena always loves only-horse status, and is not very good at sharing her carrot-and-butt-rub-giving mom. (Me, that is.)

It was a great day for all of us and I felt really good that I could haul the trailer - and Lena - on my own. Including having to pull into a driveway and turn around on the tiny, windy road Karen's barn is on after I drove past her barn on my way there. Without dumping either Gus or the trailer (and Lena) in a ditch, no less. Not to mention avoiding running over any of the Sebastopol pedestrians who decided to meander across my path on my way home. Silly people.

I do have to note that every time we went past a cow pasture, I could look in my rear view mirror and see that spotty nose poking out the screen. We're going to do some cutting practice on Thursday, so I'm excited to see how she does - even if there are no cows.

And here is the obligatory over-the-ear photo, with no one in front because Lena got to blaze the trail this time. Check out those ears, folks. :-) 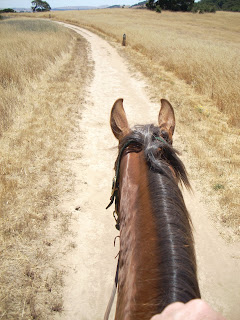