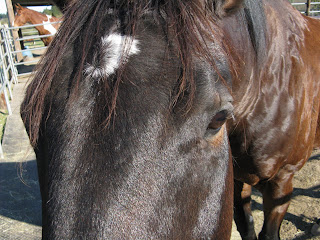 It's been a busy week for us, with much of our family coming to visit for Thanksgiving, so the horses didn't get much work. They did get attention and carrots, but both were anxious to get out by the time Friday rolled around.

Katie took Lena out and both of them had a very good ride. I set the cones up for them, supervised carefully by Lena to make sure they were the proper distance apart for racing around and graceful lead-switching. Bar wanted to come out, but there was too much going on at the barn, and we had Steve's brother, wife, and 4-year old nephew with us, too, so it was just too hectic right then. That may have turned out to be an inadvertent lesson, since Bar was pretty upset watching Lena and Katie run around on such a nice day while he was stuck in his paddock. 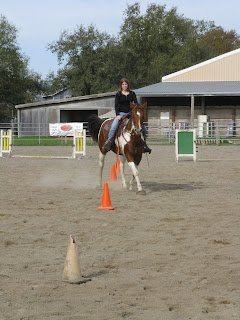 I also tried a new tactic to deal with Bar's suddenly recurring habit of nipping--he got a "time out," meaning I left him alone in his paddock for a little while every time he tried to take a bite, which actually seemed to work pretty well. 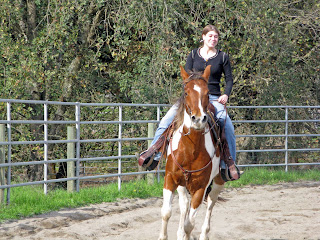 After we saw everyone off and had lunch, we went home where I fidgeted for a little while. Steve pointed out I couldn't possibly settle down until I went back to the barn, so I went. Bar seemed glad I showed up again, and really excited when I walked over with his bridle. I sat in his paddock, swapping a new bit onto his bridle, while he licked my pant legs and nosed the bridle without even an attempt at a nibble. I know some people would tell me to discourage any mouthy behavior, but I don't have any problem with him being affectionate and he's proven over and over that he knows the difference. He gets a completely different look in his eye when he's about to take a nip--a look that was noticeably absent while he waited for me to finish the bit-swapping.

I think one of the places things started to go astray with him recently was in the round pen, particularly me not enforcing discipline and letting him run loose, including over my commands. Not a good plan, I admit. So this time, I did some basic walking and leading ground work with him, then left him in by himself to give him room to buck and fart to his heart's content while I watched but didn't direct him at all. Then I went back in and asked him to do some more work with me, for me, on the longe line. He was a little confused at first, but he did stick with me and trot some patient circles both directions without arguing, stopped when I asked him to, then walked calmly back up to the barn with me to get saddled--in the dark at feeding time, no less.

It was too late in the day to let him work up much of a sweat, plus he'd gotten a lot of his pent-up exuberance out in the round pen, so I was hoping to work with his brain using my body cues while keeping him at a walk or trot. It actually went pretty well. I worked on slowing his trot with my post rather than my hands, which would have worked better if I'd shortened my stirrups a hair more to get out of the saddle better, but we'll try that next time. He was pretty cooperative, even though I knew he was dying to do more running, and I just concentrated on setting him up to succeed so the session stayed positive for both of us.

I had been a little worried about him physically because he had refused to go forward with Steve the other day, so concentrated on keeping him moving forward and on keeping my hands soft and out of his mouth. I don't think I did a great job, but he gave me most of what I asked for, so I must not have done too badly as far as he was concerned. He is, however, getting a massage Friday from Karen to be sure I haven't missed anything obvious. Yes, my horses are spoiled. I suspect Lena will be miffed when Karen arrives and Lena finds out she's not the one getting the massage.

Bar has been a challenge for me in a lot of ways, but he's also making me think a lot about why I love riding and horses. He's making me be creative with my training and push my skills further every day to figure out ways to show him how to be a better horse.

I know he can be a brat, but he's my brat and I think he's worth it. I also think he's got so much more in him and can teach me so much more about being a rider and horse owner--I just have to convince him it's more fun to work with me than to argue with me. 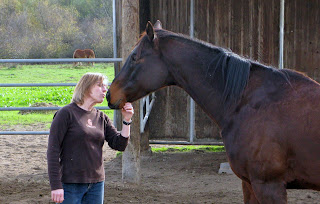