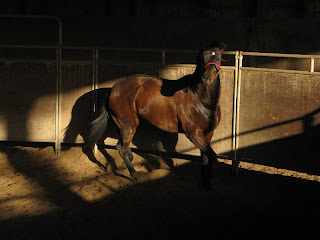 When Steve and I were up at Slide, Ike and Cheri were interested in hearing about Bar and how things were going with him. Cheri admitted to being worried about me because racehorses can have such interesting issues when it comes to retraining.

We talked a lot about some of our challenges, and also about how great he is on the trail. Ike got that trainer gleam in his eye and commented that it sounded like Bar had pressure issues in the arena.

So I've spent the two weeks since we got back watching Bar and his reactions as I ask him for different things, both from the ground and from his back. I'm also paying attention to my own body and my own reactions to see how it all fits together.

I took him out in the outdoor arena on an extra-long lead rope (two tied together, actually) and could not get him to go around me at anything but a walk. Now, he goes around me fine in the round pen with no lead line, but he pulled back and backed away from me when we tried it on the line in the big arena. I could, however, point him at any obstacle and he'd go over or around it with me driving him softly with no problem whatsoever.

Peter says Bar just knows what he can get away with, but I'm not sure that's it. My boy acts scared, or at least un-confident--eyes wide and ears up as he backs away from me trying to figure out what on earth it is I'm asking.

Going back to what Ike said about arena pressure, I have been trying to come up with ways to set the arena (just indoor for now) up as a non-threatening place. We walk around, we go over obstacles, we stop and sometimes listen to the things going on outside the arena and I keep a running, hopefully soothing, dialog and rub his neck as we go about our work.

I am also trying hard to relax and go with him when he starts to dance instead of picking up his head hard and grabbing with my knees. I figure that the past behavior of spinning him and matching his freak out with my own probably did not lend itself to making the arena seem like a safe place.

Friday, he tripped and went down to his knees while I was riding and then pushed up and danced around in a circle. I dropped my butt down in the saddle and talked him through it, then went back to walking the arena. The first loop back around, he avoided that spot in the arena like it was the corner's fault he tripped. I just kept edging him closer and closer each lap until he dropped his head and relaxed his ears through the "danger zone." The very last thing I did was ask him for a lap at the trot and he gave it to me without bolting and I called it good for the night.

I have no idea what I'm doing, whether it's right, wrong, enough pressure, or not enough. I just know that this horse is different than Lena. He will go through things, over things, under things, for me just because I ask him to. He'll even do things Lena won't, simply because he trusts me to take care of him.

It has taken me a long time to earn that trust on the ground, and now I have to re-earn it from the saddle. I don't know if I had his trust or more of confidence in myself, once, but whichever, the saddle is our pivot point.

It's not rocket science, but it is a study in patience and psychology. I know I can get there with him, and that's not a statement I was always confident enough to make.

So maybe he's retraining me as much as I'm retraining him.
Posted by Jessica Boyd at 7:29 PM