(Re) gate training an ex-racehorse 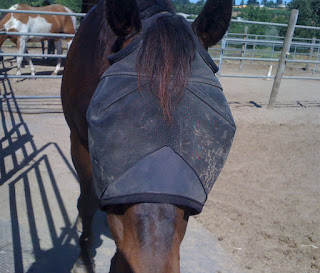 Racehorses know what gates are, and what they are for. They open magically in front of you and you dash through them head first as fast as you can, of course. What else is there to know about them, really? Bar could not figure out why we would go up SIDEWAYS next to a gate, or why I would be leaning over and urging him closer--again with the sideways--and would get quite frustrated with such a nonsensical approach to things.

Lena was gate-trained when we got her, and Bar would watch with some interest as she sidled up, let Steve lean over and open the gate, go through, and side step to close it all up again for Bar and me to try. However, watching never quite translated for him.

Enter the longest rehab known to man (okay, that's how it feels) and the opportunity to do a lot more groundwork, including some gate training.

Truth be told, this occurred to me sort of accidentally during our normal routine of going in and out of the different entry points to the indoor arena. I realized he was lining up nicely parallel to whatever gate we were about to open and a tiny flashbulb went off in my brain.

We started going through the same motions we would use to open a gate, go through, and shut it again, with me guiding him from the ground. Encouraging him to side pass right up next to a half-open gate to close it again was the most challenging thing, so as long as he stepped as close as he was comfortable--giving me that try--I'd close the gate and reward him. Pretty soon, we had it down to a pretty smooth routine and the only way to tell if it translated was to try it from his back.

Now, as some of you know, I'm not supposed to ride until I have clearance (and a new cast) from my doctor. But my horse keeps doing everything I ask of him and looking at me with those big brown eyes, wondering why I won't get on when he's being so good. And darn it, I miss riding!

He headed over to the fake gate in the arena, set up for trail practice, so I thought I'd see how we would do with it. No time like the moment your horse offers you that willingness to give something a try.

He walked up parallel to it, side-stepped closer when I asked, went through, turned, side-stepped and backed until I could get a hand back on the gate--which would have been enough--then gave me a little more so I could close it! It wasn't trail-class worthy, no. My hand came off the gate and we weren't very graceful about it, but I don't care. He did it, and then he did it again!

I told him was the best horse ever, got down, and gave him a hug and a carrot.

Very good! Approaching gates sideways isn't a very natural maneuver for a horse and it does take a while to click. I worked a lot on gate opening/closing with Maisie at one of the Mark Rashid clinics - she does it easily now and actually helps by nudging the gate with her nose!

I'm so proud of him! As if you couldn't tell.

Lena also helps with her nose, sometimes a little too much!

Steve and I are auditing a Mark Rashid clinic here in September, I can't wait!

Bravo! Smokey absolutely will not stand next to anything, let alone a gate. After numerous failed training attempts, I gave up the ghost.

Glad to see you and Bar worked through it.