Life with an OTTB 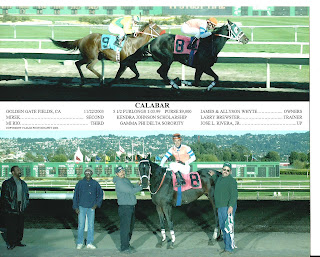 Admittedly, there were a lot of blank spots in my horsey knowledge back when Bar and I joined forces in December of 2007. Not so much about horses, or even spirited, high energy horses, but about Thoroughbreds in general and OTTBs specifically.

I had never even been to the horse races except once at the Santa Rosa Fairgrounds when Katie was 8. She told me to bet on number 8 to win. I bet Win-Place-Show. She has never let me forget it.

That was eleven years ago, before Bar had even been foaled, and long before he started down the path into my world.

In my efforts to understand him better, to figure out his reactions and how I can help us train each other, I've been lucky to find a lot of resources out there. New Vocations, LOPE Texas, and Retired Racehorse, to name just a few. I've also visited the track more than once, watched morning workouts, and read about famous racehorses like Seabiscuit and Secretariat. Steve jokes about me being a little obsessive, but it seems important to understand--really understand--where Bar is coming from.

We know Lena's background, had ridden her brothers and sisters and are good friends with her owners/breeders. She is not the mystery he is, though sometimes she likes to pretend she is. We have watched babies get started there and know how she was trained, know who her pasture buddies were, and had even ridden and patted her nose before even considering bringing her home.

Bar has some distinct fuzziness in his past. I know his breeding, I've watched (and re-watched) all his race footage, and I know he's an escape artist. Because I'm still in touch with his trainers, I learn more about him every time I see Devon and Howie.

Devon, who has been encouraging and tough with me as required, only came into Bar's life for his last race--the one where he got hurt. She's picking Howie's brain for me for more detail, but did say Bar was "very calm shipping in for that race. He was a very good boy, knew what he was there for, that sort of thing!"

Last time we saw Howie, he told me about Bar first arriving off the van to start training and immediately flopping down in his stall. Howie didn't worry too much initially--it was a long drive--until he went back to check and Bar was still laying down. Howie checked him out and found all four feet were hot to the touch. Bar had hot nails run in all four feet. For the non-horsey folks (Mom), that means he had nails run into the meat of his foot, rather than his hoof walls. Think bamboo under fingernails, then running on those fingers. Makes me cry and rage at the same time. (Crage?)

They worked him in glue-ons for awhile--much more expensive--until they could get shoes on his thin-walled hooves. This could explain his not-so calm reaction to his first shoeing with our farrier. He trusts Mike now, but it was a bit of a long road. The deal may have been sealed the one time Mike thought he ran a hot nail and immediately pulled it out, rather than--despite their early history--simply assuming Bar was just acting up.

In other words, Mike listened. He doesn't cut Bar slack, ever, but he's fair and he pays attention. That's key with any horse, but with a Thoroughbred coming off the track--so sensitive and drilled to rely on their humans for every little thing--it's crucial.

An OTTB is not necessarily the horse I'd recommend for everyone--despite my obvious love for the big, brown subject of so many blog posts. In fact, had I known then what I know now, I might have hesitated longer than a split second. And what a tragedy that would have been! It is important, as Natalie at Retired Racehorse has said, to understand the kind of life they came from to re-train them. Not cater to it--don't get out of bed to feed at 5 a.m. and exercise at 6 a.m. just because that's what they're used to--but keep it in the equation as you move them forward.

It has helped tremendously to exercise patience and reward his littlest try before moving onto the next thing. It seems to almost immediately take the edge off his frustration, before it blows up into bad behavior, because he is (usually, anyway) trying hard to please more often than not.

Of course, not having any particular discipline we're training for or outside schedule also helps. It's just us, just our time and time-frame in play as we roll into the third year of what is framing up to be a great partnership.
Posted by Jessica Boyd at 10:04 AM

I can't even imagine a farrier being so bad as to place that many nails in the wrong place. Was he/she on drugs or what? All I can do is shake my head in disbelief. It's amazing the horse tolerates shoes at all after that.

Such a nice post. Scary to hear about the shoeing. But what I really like, and what makes me stop and think, is that part of why you're having such a great learning experience with Bar is that you have no particular discipline to work towards. It's so nice to just ride. I didn't really know that until I started riding again this year. It used to be work work work all the time for me.

(Ironically, now it actually is work for me.)

Thanks, Natalie--I think it's made the difference with him for sure. I also feel like I could ask him to train for something specific, too, now that we've built up our relationship.