People have told me that every time you handle your horse, you should treat it as a training session. I never really got that message quite as clearly as we have this week with Bar. He's not mean, but he is a bit bossy and he is constantly testing the boundaries, especially because we're all new to each other.

Saturday was a tough day for Bar and he got lessons from several sources. 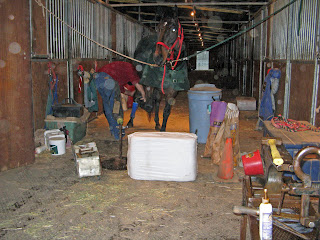 His first lesson of the day came from the farrier, Mike, who gets major kudos for toughing it out and giving back whatever Bar tried to dish out, which was a lot. Mike gave us some interesting lessons in the use of barricades and plain old horse psychology. As Mike said, "It's not pretty," but he managed to get all four shoes on, so we can continue to work with Bar without worrying about his feet. We'll worry about pretty next time. I'm supposed to make sure I ride him a lot before next time, too, so it's especially good we got all four shoes on him. 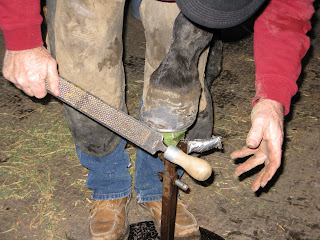 My lesson for Bar started with working with him in the cross-ties and a stall on maintaining personal space, holding still, and paying attention to his handler. I also did a little bit of accupressure practice and focused on being calm and steady myself, all of which really helped him relax and tune into what we were doing.

After I got him saddled, I took him down to the indoor arena and lunged (is it lunge, longe, or lounge?) him in the round pen while Steve rode Lena. She was in her slightly wild blow-off-steam mode and Bar was was a little distracted by her, but when we were done, he stood with me quietly and just watched her over the top of the round pen, never pushing on me and being very polite and calm as we exited the round pen.

Katie had the tough part of Bar's next lesson, which included sharing the arena with me riding Lena. When Katie got on him, he started to rear before she got her feet in the stirrups, so she backed him up into the wall, then went on with his workout. Meanwhile, I trotted and loped Lena around the outside of the round pen so Katie could have the outside track with Bar. Lena had calmed down and was moving nice and easy, so they paid attention to each other, but didn't set off any simultaneous explosions. I figure that's pretty good for the first time.

All in all, he was pretty tired, but not quite tired enough to hold still when we started to re-bandage his leg - his final lesson of the day. Steve had his head, and he kept dancing away from Katie and me and the bandages, but when I slid my toe on top of the hoof on the injured leg, he suddenly stopped and just held still while we finished up.

When we put him back in his paddock, there was definite grumpy horse vibe in the air, but by yesterday, he seemed willing to not only forgive, but cooperate. He stood still for Steve in the cross-ties, stopped and slowed at all gaits when I asked him to, and went calmly and quietly down the driveway with and without Lena. On a loose one-handed rein, even! He was really responsive to both leg and reins, and to praise and the release of pressure on the bit, too. Now that I think about it some more, I'm not sure if he was more responsive to the latter, or if I was using it better, or maybe I was just more relaxed in my hands and that was what he was reacting (or not as the case may be) to. Maybe there is a little bit of owner training going on here, too. Hm. 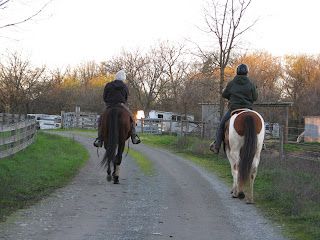 Today, we just went out to clean the paddocks, groom both horses, and change Bar's bandage. He stood still for me, even when I poured hydrogen peroxide on his leg - which had to both be cold and feel weird when it bubbled - all the way through the bandaging process. Of course, he also got brushed and petted and smooched, so maybe he figured cleaning out the wound wasn't so bad after all.

Of course, none of this is a guarantee for tomorrow, but that's part of what is so entertaining about riding horses. At least in my weird little world it is.
Posted by Jessica Boyd at 11:25 AM