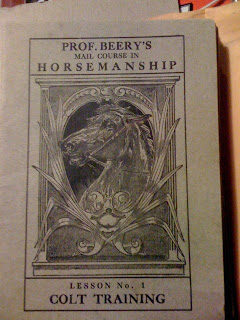 My great grandfather had horses, working horses, and apparently needed some assistance with training them. So, long before there were the Parelli's, Clinton Anderson, Mark Rashid, or any of their predecessors (like the Dorrances), there was Professor Beery. I have eight of his mail order lessons, including lesson number six--"Promiscuous Vices." Despite the title, it unfortunately does not describe how to get your spotty mare to stop backing defenseless geldings into corners.

However, there are some great tidbits so far, though not necessarily in the order they were originally presented:

"Watch the horse's eyes, ears and muscles, for they are the mediums through which it will convey it's intentions to you."

"By these means of expression, the horse will never lie to you; treat him just as frankly, and never lie to him."

"Since you must talk to your pupil through signs, do not become vexed if it does not respond to your signs correctly, but rather blame yourself for not having made the signs correctly."

"Whenever you lose your temper, you lose the power to reason and place yourself upon the same plane as the colt, where he has the advantage because he is stronger than man. Morover (sic), do not abuse your horse, for you lose his confidence and madden him. A man ought to be a shamed to abuse a horse that acts only from instinct, because he does not do what man has probably reached through a long process of reasoning."

I particularly like this bit about teaching a colt an early lesson in the round pen (or a reasonable facsimile): " Remove all feed or chickens, etc., that would attract the colts attention."

My mom's cousin found these in an envelope her father had been given by my great grandfather, sent them to my mom, who sent them to me.

What a cool gift!
Posted by Jessica Boyd at 9:33 PM

Very neat to have such a legacy!

That's pretty cool. Thank you for the excerpt. Sounds like "natural horsemanship" before anyone found the need to give it a name.