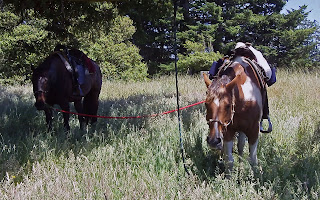 We went on a trail ride today, and I knew from the get go that it would probably derail tomorrow's lesson.
I didn't care.
Neither did Bar, for that matter.
It was a gorgeous day in Northern California--not too hot, not too cold, sun shining down and a gentle breeze blowing.
The horses were initially a little suspicious. It has been months since the four of us have been out, though Lena had been out with Katie, Forrest, and Russell a few times.
Lena and Bar both headed to the back of their paddocks when we approached with their halters, staring at us . They'd heard the truck pull up. Heard us hitch up the trailer. Watched us take the tack down and get it loaded. They stared at us--side by side, separated by a wall of pipe panel--as we made encouraging noises from the front of said paddocks.
I walked back and haltered Bar and began to walk him towards his gate. Lena took one look and allowed Steve to capture her. She did, however, pause to make sure we really were all going going somewhere together.
Now we have never really had a problem getting both of them out, so either it's been way too long (a definite possibility), or they are a little barn sour. Or both.
We attempted to load Bar first as Lena has "issues" in the front--left turns taken too fast in particular. We had Lena tied to the side, fairly long, and while I was trying to get Bar to get his big, brown self in the trailer, she walked around and stuck her head in the trailer. So? We loaded her first and Calabar hopped in right after her. 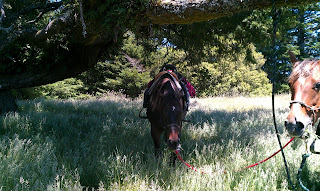 "Hey. I'm out of frame.. helloo??"
On the way back, it worked a little differently. Bar hopped in first, then Lena Ray--nearly pulling Steve in behind her.
In the middle of it all was a great trail ride. With lots of tasty grass along the way. The horses were great--feisty and energetic, but controllable and having fun. I (as always) was more relaxed on the trail, which means Bar was also more relaxed. 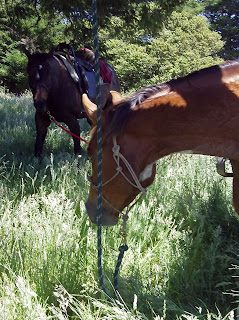 Howz your grass? Mine is tasty!
A beautiful day. A great ride. Happy humans and their ponies. Can't ask for more than that.
Oh, and p.s. To the guy in the dual cab dark blue Dodge who continued on 116 as we turned right onto Mirabel at about 12:30 p.m. today? Was that your I.Q. or your sperm count? I have some more math for you. Horse trailer + crazy tourists + 25 mph speed limit through downtown Forestville = not a time to hurry. So deal with it and be a grown up. Oh, wait. You failed.
Posted by Jessica Boyd at 7:50 PM