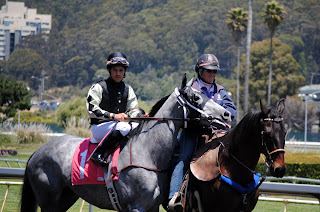 Arisail heads to the gate
In the horse racing industry, there is sometimes a razor's edge between pragmatism and hope. Maybe more than sometimes.

In the Belmont yesterday, a 24:1 horse and first time jockey beat all the favorites. That was an inspiring fairy tale ending to the Triple Crown races, but the real world of racing requires a lot of hope, a lot of faith, and a lot of working with what you've got.

Arisail's (a.k.a. Casey or K.C., not sure which) first race was today. She has been working well and while I don't know her as well as I do Sittytwofitty or Continental Cream, Devon and Howie have been very excited about the way she has been training. 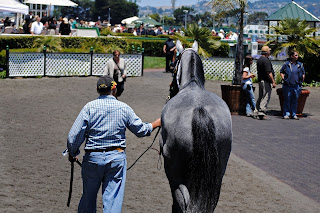 What is going on over there??
It was a tough race for her debut--one mile on the turf. Not to mention big crowds, a helicopter, and fire trucks for the "Horses and Heroes" day at Golden Gate Fields. Surprisingly, Arisail handled the helicopter parked in the middle of the track quite well. The commotion in the pre-race area? Not quite as well, but not too bad all things considered. 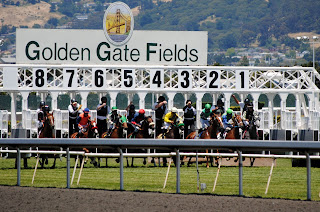 They break
The razor's edge is knowing all of the practical reasons your horse might not do well and willing yourself to be okay with whatever happens... and still feeling that crazy hope they might just pull it off.
Arisail broke okay (she's in the first pole position, number 1), but ended up trailing and had too much ground to gain to be a contender. On the plus side, she ran strong and looked very comfortable and powerful at the end of it all. 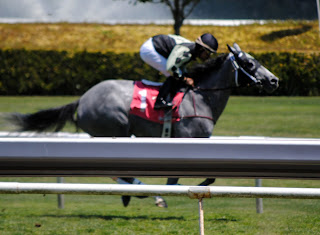 Suspended
As we trailed behind Arisail on the way back to the barn, Devon said, "I guess you shouldn't have skipped your lesson today." I disagree.

I did skip my riding lesson, but the track scene always teaches me something and today was no exception. Watching a first race is like sending your kid off to school--all excitement, apprehension, and hope. My heart hammered in my chest before and during the race, and all I wanted to do after the race was tell Arisail she did just fine.

It's probably a good thing I'm not a race horse trainer. Horses pick up on energy around them, and my swirly human emotions would do nothing to smooth out the roller coaster for these equine athletes.
But it's such an amazing ride.
Posted by Jessica Boyd at 7:16 PM