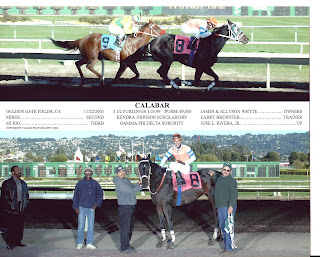 But I am worried. And vaguely terrified. And still trying not to send energy down this path.

Back in July, when we were up at Slide playing with cows, Calabar had a spasm of sorts. He started twitching--like a super bad fly twitch--and shaking his head, almost violently, but gave me time to get off and was fine after that. At the time, we attributed it to too much excitement and him needing to let go of some energy.

But now it's happened two (maybe three? I try not to count) more times in less stressful situations.

It's not predictable, really. I can go for an hour lesson, working hard, and he's fine. I can get on him and walk and trot lightly for five minutes and it happens.

I don't even want to Google it because I'm sure there are all kinds of horrid things this could be, many of them incurable "put him out to pasture" things. And that is somewhere my heart is no where near ready to go.

God I love this horse.

My very first step was to contact Karen, our wonder-masseuse, to get her opinion and have her come out as soon as she can. She thinks it sounds like C1 or C2 and gave me some things to test, so I did. I put my hand behind his cheek and moved his big, brown head from one side to the other to see if there was any stiffness. There is, on the right side in particular. No heat in the joint, but tightness abounds.

In my perfect world, he'd be doing it to get out of work. But he doesn't do it all the time and when it happens, he is very agitated and clingy afterwards. He's a good actor, but that would be an Oscar-caliber (pun intended) performance.

I have put this post off for over a month because I know all of my three readers can tell me lots of things I may not be ready to hear. For my sake, just send good energy to Bar. Or tell me I'm being silly. I can deal with that just fine.

We're going for a trail ride this weekend, both because we all need to and to see if anything happens.

I really, really hope I'm over-reacting, or that it's a relatively easily cure.

The alternative makes it too hard to breathe.
Posted by Jessica Boyd at 8:31 PM

Sorry to hear about Bar :(. I'm sure everything is fine. Maybe a pinched nerve? Sending good thoughts!

I'm hoping to get at least one trail ride with Reason in before the year is over. We sure would like some company :)!

Does sound like something's suddenly pinching him and hurting - can you do some stretching work with him to help him out?

Sending best wishes to you both.

I wish they could simply say "it hurts right here." But they can't, so it's left for us to figure out. I'm struggling with the thought that it may be time for Smokey to enter semi-retirement, but he's 22. I hope this works itself out. Bar is too young to be sent to pasture.

Oh, I really hope it's nothing. I'm with you on the no googling...sometimes (most of the time) nothing good comes of it. Try not to worry. I know:)