It's been awhile since I posted about the big Bar man and his twitchy self, and I am glad to report we are making progress. I haven't figured anything out or done x-rays or acupuncture, yet, but in my own little stubborn way, I think I'm helping him heal.

After getting back from Vegas a week ago, my first order of business was to go see how he was doing. I took him out and worked him on the ground again--following it up with some more massage and pressure point work on his shoulders and neck, more stretching. He rolled, both sides again, and THEN I cold hosed him. (Trying to leave the arena dirt in the arena this time.)

Again I got good releases and more animated movement up the hill to his paddock--he actually wanted to race me!

Then the work week hit and things got a little nutty. I worked him Monday, got out late Tuesday and said hello with carrots, golfed Wednesday, got stuck in a meeting on Thursday, had a social event Friday. Has anyone else noticed how much faster time seems to go as you get older? It's very nearly October and I haven't gotten half the things done I thought I would. Oh, well.

Yesterday, I got back to him and he was much less sore and sensitive in his left shoulder, and though still a hair touchier on the right side, he did let me dig into his neck. For a little while anyway. Oh, and he presented me with a mysterious horse injury, too. Looks like he got his back leg stuck or ?? Who knows. Looks mostly like scraped skin, nothing serious. 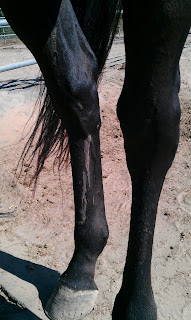 At any rate, he was moving pretty well in the round pen and we worked on lengthening him out at the trot and not breaking into a canter just because it's easier. I started out just watching from the ground at first, so I could see how he was moving, which turned out to be pretty comfortably. Naturally, I then poked at his pressure points some more which he tolerated with remarkable patience (for the most part, anyway).

He was moving so well I decided to borrow Peter's pad and training saddle and hop on and do a little more work.

He was fantastic! I was able to keep pressure off his withers and only got a tiny twitch one time, but I think it was fly-related this time. He was smooth and pretty flowing at both the walk and canter, and wanted to keep working even after I decided to stop! "No, it's okay, you can just walk." Ears up, asking to trot, such a happy boy.

He rolled, we cold-hosed, and raced up the hill to his paddock again. The only thing I forgot in my joy was to stretch him out. I could feel guilty about it, but that is a waste of energy. Energy I need to do all of this again today. Including the stretching. Which is hard work, I'll have you know.

The other piece of this puzzle is me, of course. Can you guess which side of my body is tighter? And do you know I also have a big knot on the right side of my neck? So I'm increasing my yoga and stretching again and may actually get a little body work on my own self.

When I was riding yesterday, I didn't think about being perfect, just about flowing with him and keeping as loose and balanced as I could be. I like my lessons--though we're taking a break for now--but they tend to give me so much to work on all at once, I lose track of it all and don't relax enough. Yesterday was all about breathing and rolling with my horse.

We both think that was a pretty good thing.
Posted by Jessica Boyd at 11:47 AM