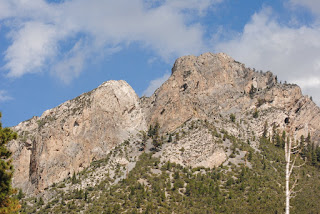 Beyond the strip, there are lovely places to visit near Las Vegas
Steve and I have been at a trade how in Vegas since Tuesday so as well as being horse-deprived, I was completely ready to be home in just a few more hours now. Unfortunately, it will be a few more hours at least. Due to some poor planning on the part of Alaska/Horizon out of Santa Rosa, our flight has been cancelled. Seems like they could have told us this before we checked our bags, but I will rant more later.
While I'm waiting, I'll amuse myself by giving an update on the Thoroughbred Twitch situation.
Monday before we left, I got the boy out and did some acupressure on his shoulders and some massage on his neck before taking for a quick warm up in the round pen. He had a little heat in his left shoulder, but I went ahead and saddled him anyway, planning on some light work at the walk just to see how he was doing. I used my wither-cut out wool pad and tried to be sure to leave space over those touchy withers of his.
He warmed up fine--rather exuberantly, actually. Then when I went to check the pad, the slightest pressure from it made him twitch, so I switched to Peter's fleece pad (also a wither cut out but open in the front) and a blanket on top of that.
I got on and we walked, just walked. I encouraged him to just move as he wanted, as he was comfortable, trying to get him to swing out and stretch through his shoulders. I got some of the twitchies whenever anything touched his neck--my hands, reins, whatever--but he would keep walking through it. Could have been heat and flies on top of whatever is going on, too.
After I got off, he had an odd sweat pattern on that left shoulder, so I unsaddled him there in the arena and took him to the wash rack to cold hose him. As I hosed him down, he gave me some good releases--blowing, licking his lips and good shakes. Then I took him back in the arena where he proceeded to roll very effectively on both sides. Very thoroughly. That is the first time in awhile he's rolled on both sides, so I'm hoping that helped him.
Of course, now I've been away from him for four days, I've had a chance to worry and fret some more. He got a break, so that may be good, too. Katie was going to work him for me, but I haven't had a chance to talk to her to see how he's doing. Except to hear he's had plenty of grain in my absence.
My vet wants to do x-rays and Karen thinks that's a good idea. I halfway agree, I just don't know that I can afford it right now, so I'm adopting a wait-and-see attitude. Keep massaging, keep stretching him, keep working him lightly, keep cold-hosing any heat. See where we are in a couple weeks, then make the next best decision I can make for him.
Luckily, he seems more uncomfortable than in a lot of pain, which gives me the head space to figure this out and help him the best I can without draining my bank account. Sometimes reality sucks.
Posted by Jessica Boyd at 2:18 PM

You're doing all you can for your boy...hey, I totally understand holding off on some things for financial reasons. It's too easy to stew when we're away from the barn for too long:)