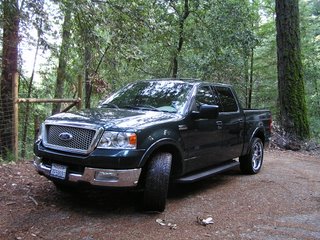 We did it. We bought a truck. And let me preface the rest of this with the fact that not only do I love my horse, I love cars. We have three - the truck, the Mustang Cobra, and the Previa van. We had a Volvo wagon up until yesterday.

We had gone back and forth over the last six months or so about how to handle the daily needs of a family vehicle and figuring out a way to tow a horse trailer. While it did a nice job of scooting the four of us around, the Volvo wouldn't tow. It also broke on a regular basis and cost lots of money each time, so it was already on its way out of our lives.

For a brief moment in time, the plan was to buy an older truck that would replace the 1991 Previa van - which mostly sat until needed for a dump run or hardware store duty. But the van is hard to replace - it starts up beautifully after sitting for 3 months and will also carry the whole family if needed - things an older truck might not do as reliably. (Too bad the van won't haul a horse trailer, too, but 148 horsepower isn't quite enough for that duty.)

So yes, I will be using the truck as my daily driver - I'll be one of those tiny women in a big truck you see on the road - but it seems like the best solution for us for now. Yes, fuel economy is a concern, but we won't have four cars, so that's kind of the trade-off.

These are the sacrifices you make for your horse when you aren't Jay Leno with a big garage and a car for every occasion. Though I have to confess, I really love my big green truck.
Posted by Jessica Boyd at 7:39 PM