Steve and Lena were having a fantastic time this afternoon, warming up in the sun, weaving in and out of the cones we have set up in the big arena. I took a few pictures, but she looked so lovely in this one, I had to post it. Steve even said it was okay that I cut off his head because Lena looks so good with her mane flying and her ears up. :-) 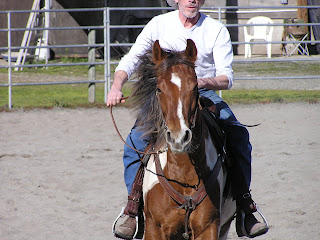 We both had good rides, playing with her speed and athleticism, feeling how powerful she is. One of the other boarders was there and said to her husband, "See, Paul? I told you'd they'd be here." Then she told me it was really great to see people who enjoyed their horse so much. That was about the best compliment I've ever gotten.

We do enjoy her, more than I possibly could have imagined.

Thank you, Lena, for being so much fun.
Posted by Jessica Boyd at 5:30 PM