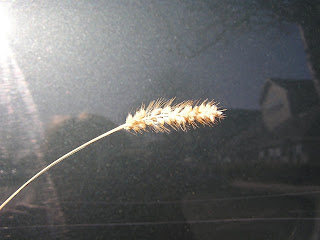 Here's the culprit, a rather benign and soft thing at first glance, but textured much like the fluffy stuff on the inside of an artichoke heart. It is so fine and sticky, it's hard for horses to get it out of their noses, lips and mouths, where it then proceeds to cause the irritation and sores we'd been seeing. If you touch it, you can feel the resistance, even on roughened fingertips, almost like a softer version of a foxtail, but smaller and lighter, so more insidious. Note the yellow-gold color at the end of the spiny parts. (Obviously, my plant terminology could use a little work, here.)

Shannon's vet - Dr. Jamie Kerr, who is also Katie's vet - showed up, took one look at Lena's mouth, planted his hands on his hips and said, "Let me see the hay." He said he loves this diagnosis because it looks so terrible and inevitibly getting rid of the hay causes almost immediate improvement.

He and his assistant Justin climbed all over the last two shipments of hay Peter got and pulled piece after piece of it out, showing all of us, and pointing out bales where you could see big sections of it mixed in with the rest. He even left me a baggie to give to Dr. Leslie when she gets back to town.

Dr. Kerr used to practice in Napa and said he saw a lot of this about 20 years ago from hay that came from the Dixon area and did a lot of work convincing hay providers that it was indeed a problem. Apparently cows can eat it just fine, but horses can't. This was a new supplier for Peter, though recommended by the last supplier, and he's supposed to swap all this hay out for Peter - presumably for something without bristle grass in it.

Steve and I crossed email the next morning, both of us expressing immense relief that Lena wasn't sick. Her lips are already healing beautifully, as are the sores on the inside of her mouth. I'll post some pictures later, though the sores are not nearly as dramatic as they were.

After I knew what to look for, I found this PDF on the web. It describes the reaction - and the bristle grass - perfectly. Of course, I had to search specifically for "horse mouth sores and yellow bristle grass" to find it, but at least I'm able to post it here so my small circle knows what it is.

You learn something new every day, it seems.
Posted by Jessica Boyd at 10:00 AM

Thank you for the information regarding this Yellow Bristle Grass. Do you know where the hay came from? I have been inspecting some of the hay that was trucked in from N. Solano County. Some of it has "strange" looking stuff in it. I am going to go through a few of the bales and if I find this little nasty. I am going straight to the barn manager. God Bless Jamie Kerr. He moved from Napa and his way with horses, knowledge as a DVM is sorely missed. IF your DVM ever retires, you can put your trust in Dr. Kerr.

I don't remember where that hay came from, but I do know the symptoms started clearing up within 24 hours and haven't come back.

Dr. Kerr is great, even Lena - who knows what vets are all about - agreed. :) My vet was actually able to use this information (and a sample I got from Dr. Kerr at the time) to diagnose the same problem at a different barn.

Good luck, I hope it's not in your hay!

Hello, a friend of mine bought some hay from a feed store in Suisun last November. She started feeding it in December and her horses started getting soars on their lips late December. We ran into each other over the holidays and I remembered your blog. She's going to contact the feed store and ask to bring back the hay since it's loaded with Yellow Bristle Grass. I will let you know how it goes.