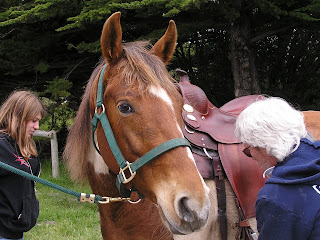 Katie, Steve and I took Lena to the beach today and it was a blast. I haven't had this good a workout in a long time and neither had Lena. On the way, we stopped in Duncan's Mills to go to the bathroom and as we got rolling again, we learned a valuable lesson: Make sure your windows are firmly latched. There was a crash and Katie saw Lena's big brown head come around the side of the trailer. She'd pushed her window open and would gladly have ridden down the road that way, but I relatched the window anyway. Mean, I know.

We almost decided to go to Armstrong Woods instead, but decided we really wanted to see how she would react to the beach.

Practically the first thing she did was charge up a steep sandy hill and then stand up at the top waiting impatiently for the two legged folk to make it up behind her.

Here are Lena and Katie watching us from the top. 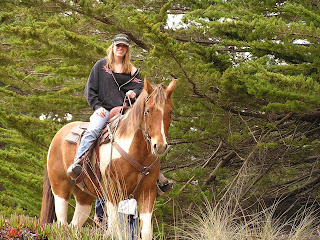 Here's the hill, looking down from the top, where I was standing using taking a picture as an excuse to catch my breath. It's a good thing Steve and I are in such good shape or it would have been a tough day at the beach for us since Katie did most of the riding. 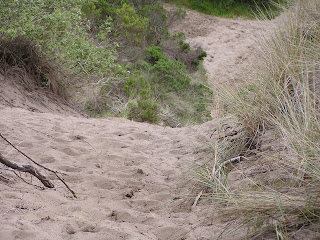 Lena was actually pretty anxious to see what was at the end of the twisty, almost tunnel-like trails through the dunes, though on the way out she kept turning around to make sure Steve and I were following along.

Then she saw the waves and heard the surf and almost turned around and went back to the trailer right then and there.

Katie let her run in the sand, trying here and there to get her closer to the surf-line. There was much snorting and only minor concessions from the spotty horse. 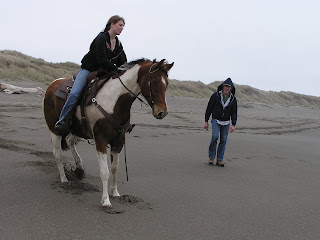 Then I got on for a little bit and we played dodge the driftwood before I actually got her within 5 feet of the water. For a second, anyway. 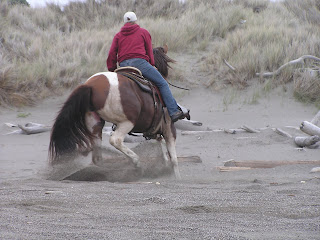 There were a couple groups of trail riders and Lena got a little anxious after the first group came down and then went back up into the dunes. Mostly she was okay by herself - good that she's so self-confident - but she thought maybe those horses knew something she didn't. Like where the buffet was.

Katie got back on and rode her back, wandering off on her own for a bit until she circled back and found us.

Lena got to roll in the sand, even, which she thought was divine.

Getting her back in the trailer presented a bit of a challenge, but both Katie and I loaded her one time each while Steve chuckled at Lena's new game. 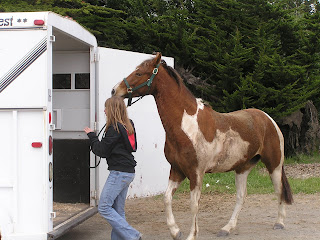 All in all, a very good day and another chance to experience what a good horse we have. 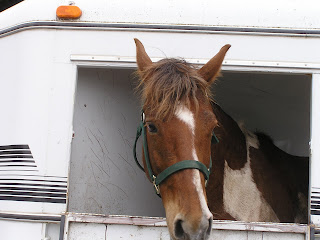