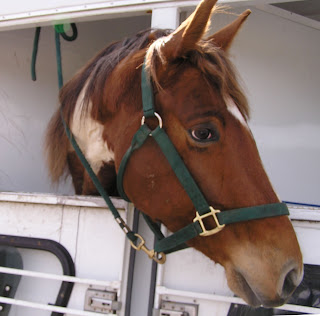 We took Miss Lena out today, just Steve and I, and we all managed to survive.

Actually, we all did really well.

Lena was a little skeptical to start out with, though she loaded great. I suspect the hay bag full of alfalfa helped a little. 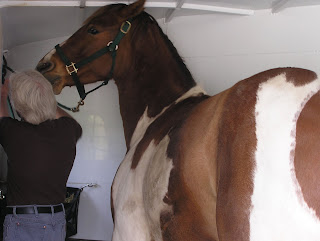 She kicked or pawed - not sure which - for about the first 15 minutes of the drive over to the park, but settled down after a bit. It's hard to be an only horse, after all, but something she has to get used to for now. Steve commented that you can certainly feel 1,100 pounds of horse moving around behind you while you're driving.

Once we got there, she was curious and a little apprehensive, but handled things really well. Steve walked her around a little after he unloaded her to let her get a feel for the surroundings and get her bearings. 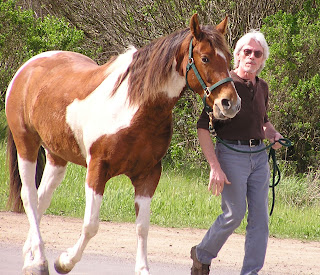 Then we tied her to the trailer to groom and saddle her, giving her a carrot or two for managing to behave so far in our journey. 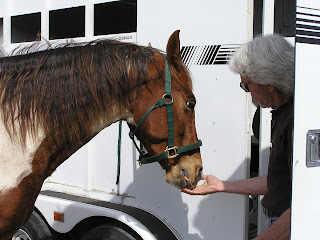 We looped around a lake, with me on foot first, then trading off with Steve on the way back. It was a good way to do things, though we may try adding a bike in next so the person not on horseback doesn't have to jog to keep up with the long-legged spotty horse.

She handled a stream crossing - okay, not a big one, but still - dogs, other people, fishing poles, steep, narrow and slippery trails, scary logs, and black fabric waving in the wind with only minor snorting. She particularly loved the short walk through the redwood trees and trotting on a nice wide open trail. Oh, and the nibbles of grass she was allowed to grab on the way. Sometimes she wanted me to go first down a section of trail that looked a little dubious. Sometimes I would and sometimes - particularly if it was too narrow - we made her go ahead lest she decide to run over my small self. She thought the porta-potties were the single weirdest things of the day, especially when we each went in one!

She only had one minor spook - very short sideways jump - right after Steve saw something that he thought would make her spook and commented that she didn't jump sideways and toss me on my butt. Then she skipped sideways, but didn't toss me on my butt. Always better that way. 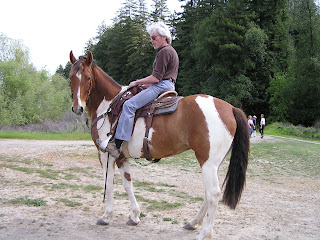 I think Steve and I were both a little apprehensive about taking her out alone, but she did great and so did we. She's pretty confident, which helps, and I think she trusts us, which also helps.

I will say that loading her back in the trailer to go home after our fun adventure was not quite so smooth. It took three tries instead of one, but she did get in and wait (mostly) patiently while Steve and I had some snacks before we pulled out for home.

Another positive thing from the whole adventure is how well Gus (the truck) handles his towing duties, and how well the trailer we found is suited to us and what we need to do. There is something very cool about driving a truck that's hauling your friend the horse and getting where you're going in good shape.

Good day all in all.
Posted by Jessica Boyd at 5:30 PM

Laika and I were over at Ragle yesterday, and the big back loop was open. We heard a horse carrying on on the other side of the loop, and I actually thought, "Oh, I wonder if that's Lena out on her first trailer trip!"

It was a beautiful day, glad you had fun!

What a fun day! Love the comments about the things Lena encountered and handled so well. Also your comment about her not falling on your small self.