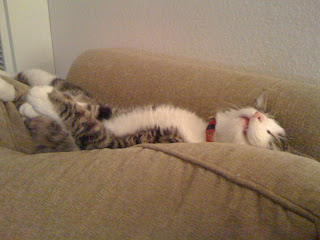 Yesterday while I was on my way home from Spanish class, I received a call from Ryan, my fiance. He was very anxious for me to get home but wouldn't state why. I walk into the study and Ryan has this little smirk on his face. I look around the room trying to figure out what he moved, cleaned, destroyed, ect. Then I hear rustling inside a shoe box. He laughs, opens the lid of the box, and inside is a MOLE!
Apparently Faaris has discovered the joy of hunting. I was relieved that the mole was alive and even more relieved when Ryan walked outside far into the field to release the little rodent. Unfortunately the story does not end here. In the middle of the night Ryan woke up to get some water and found the same mole dead in our kitchen :(. AND HE DISPOSED OF THE MOLE IN THE TRASH CAN!!! THE TRASH CAN IN THE KITCHEN!! Ryan came back to bed muttering some quick facts about moles - did you know that moles eat earthworms and that there is some chemical in the moles' saliva that paralyzes the earthworm? Did you know that that there is a certain type of mole that can kill its prey in a 300 hundredths of a millisecond, to fast for the human eye to see? Please note that this conversation is taking place at 3 a.m.! And to make matters worse, now Ryan is proud of Faaris for being a hunter and they have quickly have resurrected their friendship, literally overnight.I just hope the trash has been taken out when I get home tonight.
Posted by Katie at 10:36 AM