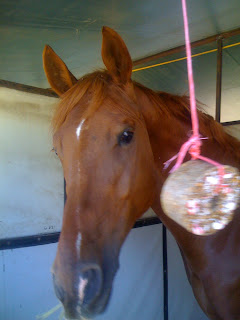 This weekend was very busy! It was packed with a work event in the city, a rehearsal dinner for Ryan's brother, and then his wedding, saying goodbye to my little sister as she embarks on her college adventure at NYU, and then a horse show!!!
I was a little worried that it would all be too much and that I wouldn't be mentally and physically prepared for the show..... but i was wrong!!

The first plus of the show was that it was held at our barn. I literally woke up and went to the barn in my pj's. There was no packing, hitching up, and driving involved! It was so relaxing and nice break from the bigger shows we've done this year. I got him all gussied up and even had time to apply the finishing touches such as rubbing baby oil to his muzzle to make him look even more handsome!

I allowed 45 minutes to warm up before the first ride. He felt great and had a little more energy than normal because of all the excitement. I did a lot of walking and focused on him being straight, active, and relaxed. We rode into the show arena and performed the test very well. He stayed focused the whole time and was right on my seat. My only complaints were one bad leg yield to the right and one over exuberant trot to canter transition. The result - a 72%!!!

The next test was two hours later so I gave him a bath and lunch! It was very hot out so I decided to do only a 20 minute warm up to keep him fresh. Our warm up felt good and we went into the test and nailed it! First level test 4 has a lot more canter work in it so I'm always a bit more nervous, but Willoughby stayed with me the whole time and performed beautifully. This time around we got a 73%!!

I was so proud of Willoughby! We received our highest scores ever as a team and I scored my personal best as a rider. It looks like I need to learn how to make some more stallipops for him as a reward!
Posted by Katie at 11:56 AM