Bar tries to be psychic 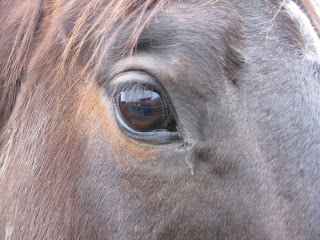 Bar is very, very routine oriented. He likes things to follow a certain order--not only likes it, but expects and anticipates it. Considering his earlier life, that makes total sense, but sometimes it's hard not to laugh.

Today I took him down to the round pen to work him. That in itself was a good challenge for him because Peter was riding another horse in the arena which allowed me to set Bar up to deal with that situation, not freak out, and stay focused on what we were doing. Happily, Peter doesn't rely on me to keep my horse under control in order for him to keep his horse in control. He deals with the horse he's riding, which allows me to work with Bar and train him without worrying about upsetting someone else. (What a concept, eh?)

We got through Bar's warm up, which was a little wild since he hadn't been out in a day or so, and because he was showing off a little. But he listened and changed directions when I asked and I was able to keep him focused on me, rather than Peter and the other horse. That's a big deal for both of us.

After that, we did our normal ground work, yielding his hindquarters, backing up out of my personal bubble, following off-lead, etc. Then I switched the routine on him. Instead of being done, I asked him to trot. He backed up. He swung his hindquarters away from me, ears flicking back and forth as if to say, "What?! Aren't I doing what you want?" I did get him to trot for me, both directions, but I had to stop laughing first. It was somewhat deliberate on his part--a new avoidance technique--but instead of him pushing past me and ignoring me, he was at least trying to get out of my way by doing something familiar he knows gets him praise.

You know? That's not such a bad step for us all things considered.
Posted by Jessica Boyd at 4:29 PM

Hi, I am a new fan of your blog. Hope you can join my free horse lovers club RiderMate.com. It is very active now.