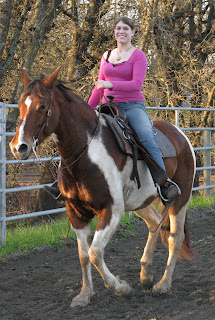 As I'm reading more and trying new things with Bar (and Lena, too), I'm learning a lot about myself and about my two horses. What works, what doesn't work, how to switch my attitude based on each horse and each exercise, etc.

Our two horses are very different in most every way, evidenced recently by their reactions to the training tools we're using--a crop-like device and an extra-long lead rope. Bar takes them all in stride, seeming to know they are just an extension of me, easily handling the transition between the tool asking him for something and the tool just being in my hand, scratching his head or rubbing his neck. Lena looks immediately suspicious, snorting, dancing around, big brown, worried eyes looking at me like she's sure I'm going to start beating her any second. With her, we're really going to have to start from the very beginning to get her much less sensitive to anything out of her comfort zone. You know, things like an extra-long lead rope. Or her blanket some days. Or the sign in the arena that was there yesterday.

I've worked a lot more with Bar--as is often the case, Lena has not gotten as much of the time and training because Bar is the "problem horse," so I will have more on her later. I know with him, I really have to watch what I'm doing pretty carefully because I trip over myself on both extremes--either not aggressive enough or too aggressive. He really needs just the right blend from me or he just gets confused and upset, and that's not a good combination. We're getting there, though. I have to remind myself that every step forward is a good thing, no matter how small it may seem at the time.

We have two different attitudes to work with, but I think it will really help both horses a lot to keep doing these exercises. It may not even necessarily mean doing all the exercises perfectly all the time, just using them to reinforce the attitude that I'm the alpha and they don't have to worry as long as they listen to me.

I have been accused a lot of my life of being bossy, but if I think about it, the times I've been the most bossy (not assertive, bossy) I've felt the most insecure. I think I can use that to understand why my horses need me to be assertive and take control. When I felt that the situation wasn't being controlled correctly (or at all) by the person who was supposed to be doing it, I took over. That's what the horses will do if you don't take charge of them. They have to. Otherwise they don't survive. And you have to prove that you deserve their respect every single day. That's the deal.

Some horses give that up easier than others. Mine are a little tougher that way, but I think they will not only give control to me, they will relax and be happier when they do. And I'll bet it won't always be such a battle to get it, either. Bar is actually happier to relax outside my personal bubble than he is pushing at me for a cookie. It gives him boundaries and herd structure he can understand, and he thrives on praise and knowing he's done what I've asked him to do.

And maybe I can even stop being so hard on myself about not doing every little thing perfect every time, maybe let this whole thing flow and progress and even have some more fun while I'm at it. (Kinda like Katie and Lena are having in the photo above. You know, fun.) That's as close to a New Year's resolution as I'll ever get, but it's not a bad one.
Posted by Jessica Boyd at 6:11 PM