Every winter, our farrier has to visit a little more often than during the dry times of the year. Not because of hoof disease (knock wood), but mostly because Bar has Thoroughbred feet and his shoes do not always stay as connected to his feet as we would like.

Lena has awesome feet--big and well-formed, with solid and thick hoof walls. Mostly, the only time her shoes come off is when she steps on them herself and pulls one off. 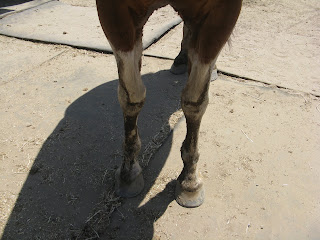 Bar, as mentioned in previous posts, has fairly typical feet for his breed. Racehorses are built and bred to be light and go fast, so they don't always end up with tough, sturdy feet. His feet have, however, gotten much better with the work our wonderful farrier, Mike, and Farrier's Formula. 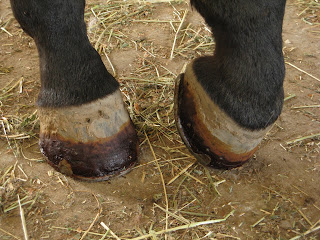 Every winter, it's a dance to see how long we can go between shoeing as the moisture and mud soften Bar's already thin-walled hooves, letting the shoes work themselves loose. Last year, we added clips to the mix during the worst of the wet, but that's a trick, too. Clips can weaken the hoof wall by allowing bacteria to get behind the clip, so it's a balance between keeping the shoes on his feet and adding to the problems. We also use a lot of iodine to keep that bacteria in check and to harden his hooves as much as possible.

The horses were just shod on the 18th, so when I took Bar out today to work him in the round pen, I did a cursory check to be sure he did indeed have all four shoes on--which he did. After his work, I took him up to treat his hooves with the all-important iodine and noticed that two nails in the left front had wandered out of the hoof and gotten flattened out against the bottom of the shoe.

Luckily, Mike is available to come out on Monday and fix it. He knew exactly what hoof and even what part of the hoof because he'd set the shoe to try to give Bar's hoof enough room to flex with the moisture.

Feet are so important - I wish all horse breeders would take them more into account!

As the saying goes, "no hoof, no horse." Poor hoof care is the one of those things that gets me wound up in short order, and tends not to win me friends.

My gelding's sire was a TB, and he inherited the TB feet. They are very sound in the summer, but in the wet winter months the soles tend to soften, becoming prone to the dreaded abscess. As a result, he spends the winter with pads on. A bit of a nuisance, but its proven effective.