New shoes (and shoer) for Lena 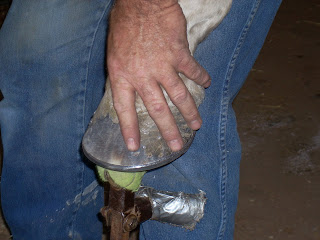 It was time for Lena to get shoes and, unfortunately, our regular farrier seems to have disappeared.

I got Mike's name from Phil and Carey (Taffy and Doc's owners, respectively), and he came out today to put new shoes on Lena. Now, even though I took the Farrier Science class at Santa Rosa JC, I hadn't gotten to watch our previous farrier work, so I was looking forward to our appointment today.

It was really neat to watch and I'm glad I got to see it all the way through.

I liked the way Mike handled Lena, who naturally had to test the new guy. He wasn't mean as she tried to dance around on three feet, but he was firm. She did check him out rather thoroughly. Lots of smelling. 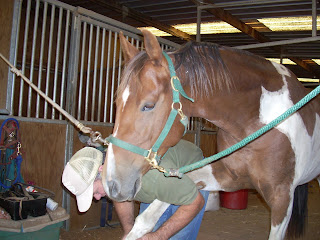 He worked quickly and efficiently, but paid enough attention to her that she knew he was paying attention. (Even while he had to listen to our whole horse history, the poor guy.)

He did really nice clean up on her back feet as her toes were a little long back there. Her frog was shedding, so he took a lot off, plus trimmed up the toes really well. You can see the extra stuff flying off in this photo. Pretty cool! 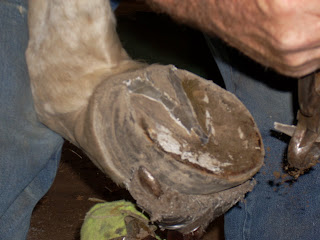 Here is a shot of him clinching down the nails so they don't bite either us or Lena. 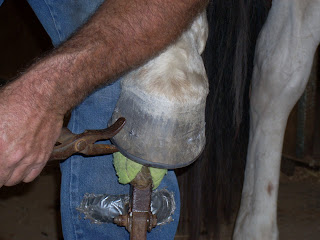 Mike impressed me with the way he dealt with Lena, and the way he worked with me. I know I'm not easy and I'm a worrier, but he answered my questions and didn't mind the camera going off while he worked. Best of all, both Steve and I noticed how much easier she was moving when we rode tonight. 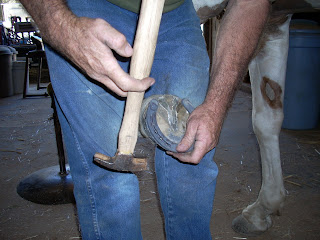 I sure do love it when someone likes what they do enough to do a good job.
Posted by Jessica Boyd at 8:41 PM