Random thoughts about life with horses

In working on a marketing project for some friends of ours, I found myself drifting back in time through my blog posts and reliving the last few years of our horse journey. We've gone from one, to two, and now three horses. All of them are fun to ride and somewhat bound together by that similarity, yet are also as different as they can be in fundamental ways 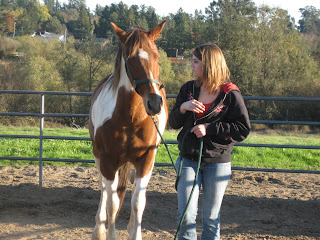 Lena is a well-bred, albeit too tall, cutting horse. She had basic breaking and training in the cow-horse tradition and is smart, confident, sensitive, inquisitive--most definitely an alpha. No question, she is in charge, and as long as the other horses accept that, things are good. It doesn't work that way with her humans, but she's always going to try just to be sure you haven't changed your mind and decided to let her run the show after all. Keeping Lena entertained is the biggest challenge for her rider, and that obstacle that she went over yesterday could be a monster today just because she's bored and feels like it. 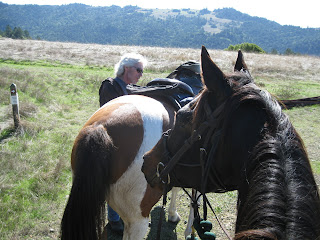 Bar is also very well-bred, but did not get the same generalized training Lena did--certainly not ranch horse work. He was made and trained to do one thing--run as hard and as fast as he could. He is also smart and curious, but much more prone to look to his human for guidance. That is part of what has been so important about the work we've done with him--he knows now he can trust me to take care of him in a situation and he doesn't have to take over. As long as I can stay calm and confident, he defers to me. It's why he's such a good horse for me--he is making me a better horse-woman simply because he trusts me to be that for him. I expect that eventually his confidence level will increase even more than it already has, but that he will never be the alpha Lena is. That's okay, there are enough of us in the family as it is. 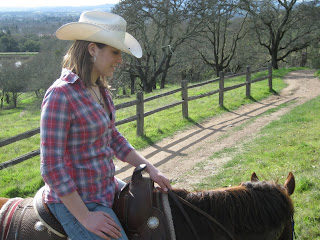 It's also been interesting to watch Katie work with Sammy--a wholly different horse personality-wise from either of our other two. Sammy takes a lot of convincing sometimes, but will usually finally go along with you. And she seems to tolerate a lot of different stimulus without either Lena or Bar's penchant for reacting--or over-reacting some might say.

The journey, it seems, doesn't really end--it just winds out and offers new trails to explore.
Posted by Jessica Boyd at 2:08 PM

Nice summary on all the horses!

I'm convinced that no two of them are alike. They have personalities that are as varied as we humans. And, if we are smart enough to pay attention, they have as much (perhaps more) to teach us as we do them.

I think that the moment we stop learning from them, it's time to hang up our spurs.