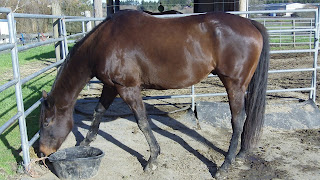 Doesn't he look calm? Sweet? Innocent? HA!
Yesterday's ride was definitely not the best we've ever had, not by a long shot, but I'll take it because--this dawned on me afterwards--I wasn't afraid of him. Not of coming off, not of losing control of him, not of him and his big, brown, Thoroughbred self. Yes, he was being a brat. Yes, we have oodles to work on. But if he had really wanted me off, I'd have been off. If I had panicked or freaked out more, I would have dumped myself by stoking the fire.
The boy has been so good lately, so tolerant of the lack of continuity in his schedule due to the additional work load in my schedule, that I may have forgotten he can (and will) be a Thoroughbred on occasion. Actually, I think Thoroughbreds merely exhibit the outer spectrum of horse behavior--the behaviors that make people say horses are wild, unpredictable, stupid, etc.
Steve needed to get Lena out, too, so we headed to the barn later in the afternoon to try and stay out of the way of folks who may not appreciate double exuberance. Steve saddled Lena, then I saddled Bar--this was the first "not normal routine" moment for him, but all he did was dance in the cross ties a little.
It did get a little worse as we got inside the arena door, though. In addition to being out of sync--meaning it was not just the two of us heading down to the round pen first so he can roll before settling into work--there were several distractions. A strange, young horse in the round pen, dancing and snorting, plus Steve and Lena dancing and snorting in reaction to the horse in the round pen and whatever else Lena thought (and I use that term loosely) might eat her.
Bar likes his routine. He likes knowing what is coming next at all times. It makes him feel safe and that the situation is under control. It's something we usually work on a lot as tossing in new things to mess with his race-track patterned brain is good for him. Unfortunately, we've been in a bit of a training rut and haven't practiced the "sometimes new things happen and it's okay" bit lately.
Note to self: Work on that some more.
As soon as we got inside the arena--with Lena snorting and the unknown horse bouncing in the round pen--Bar went a little nutty. I was still on the ground at this point and to his credit, he stayed out of my bubble. He just bounced. A lot. But always facing me and always a good distance away. I admit to being a little impressed at his war-horse maneuvers ("Look! I can jump straight up in one place and kick out!"), but it was not proper arena behavior. Luckily, with only Steve and Lena to worry about, I could focus on him and not worry about freaking them out. And the folks in the round pen with the other horse... well, okay I admit it. I didn't worry about them, either.
This behavior used to scare me. Used to make me crank on his halter, covering my panic with bossiness and demands for capitulation. Irregardless of Bar's triggers, I needed to control him because I felt out of control--rather than just dancing with him and redirecting that energy. This time, instead of getting after him hard, which only confuses him and escalates things, I kept talking to him quietly and when he would settle--even for a second--I'd pet him, let him nuzzle close, and give him a carrot. Not continuing to build up the energy worked much better--all it took was changing the tone of my voice and using my body language to let him know what I wanted. It meant we were actually communicating with--not reacting to--each other. Hmmm.
Before I got on, though, I took him into the round pen to make sure we both knew where his head was. It was still on rolling, though he couldn't with the saddle on. He did settle down somewhat, so I got on. Then he wanted to catch up to Lena only to pester her. Jeeze.
I stayed with him, kept him at a walk, kept him from rolling in the corners, and made him work for me once Lena left us to walk down the driveway. All of this was a challenge because he was not very focused on anything. He stumbled over poles he normally steps over cleanly. He either wanted to canter or he wanted to stop and have me get off so we could go find Lena. Cantering is fine when he's calm and paying attention, but neither of those things were the case and that's when we get hurt, so I kept him at a trot.
He got annoyed. I made him work through his annoyance and do what I asked for one--just one, guy!-- lap around the arena. It took a few loops, some side passing and circling, some dancing, but I finally got one cruise around where he didn't try to canter, did side pass into the corners, and stopped when I asked.
So I took him into the round pen, took off his saddle and let him roll. "Aaaahhhhhh." He said. Then came up and nuzzled me gently as if to apologize. He even let me slap the saddle back on him with no complaints so I didn't have to carry it back up to the barn.
We were both a little sweaty when it was all over, but even if it wasn't a perfect ride, it was a ride that taught us both (I think) something and that's okay, too.
Really we just need to get back out on the trail soon. If the weather report holds, hopefully that can happen next weekend. That will probably soothe all of our souls. 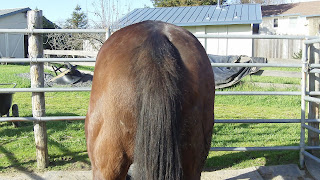 On the plus side, his hind end looks fabulous!

You're taking the role of "leader" with him. He trusts you, and looks to you for it. Even when it isn't what he wants to do. And, by not letting his antics scare you, I suspect that, over time, they will lessen.

And then you have a 21 year old horse who, upon being led into the arena, puts his head down and starts to close his eyes. "Maybe if I fall asleep he'll put me back in my paddock".