The elusive Ollie-cat is on the move

Oliver is taking his time settling in, but he is getting there. Considering all the trauma we know about, and some we can surmise from his behavior, I'd say he's doing exceptionally well. He still mostly likes to be somewhere safe where he can see everything happening--under the hassock, back behind the kitchen table, or under the piano in the den--but the last two mornings, he was sitting on the sofa when we got up and didn't disappear when we came into the room.

We are making progress!

Then this morning, he made overtures to Elmer. They've been eating side by side for several days now, nobody trying to eat anyone else's food, no hissing, fairly good behavior all things considered. So after a cheese snack for both, Elmer was sitting staring out the back door pretending not to notice Ollie when Ollie came up quietly and sniffed the end of Elmer's tail. Elmer promptly hissed and batted at Ollie, but didn't connect. We told Elmer that wasn't allowed, but didn't put him out until he asked. I have no idea how cat discipline works, but he huffed outside with only mildly ruffled feathers. Since we introduced Ollie into Elmer's territory, it's only fair to let them work things out to some extent and not punish Elmer for no doubt being a little peeved at the status change.

That apparently awakened Ollie's curiosity about the other cats and the great outdoors because he is now roaming around the available parts of the house (kitchen, living room, bathroom, and den) very restlessly. I think he is bored. Bored enough to to have paced back and forth to the back door six times in the last fifteen minutes, meowing loudly the whole time.

I know he wants out, but we want to be sure he knows this is where he is supposed to come back to first. I think we are close, though, and maybe within a week or so he can romp under the trees and sniff out slugs in the yard. 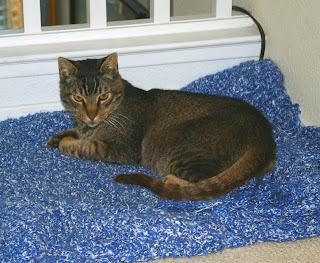 The pictures I've taken are not great because we are inside, it's winter, and Ollie is frequently under things. That requires the flash which leads to demon-eyed cat pictures. His eyes are truly lovely, deep coppery brown, like in this picture from the friend who initially rescued him, but I'm posting some of mine anyway so you can see he really is living here. He has not learned from Bar and Lena that if you just pose quickly, the photo session will end much more rapidly. 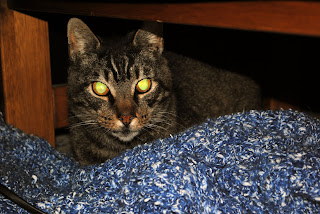 Ollie under the hassock with his blankie 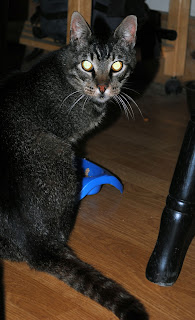 Ollie under the table 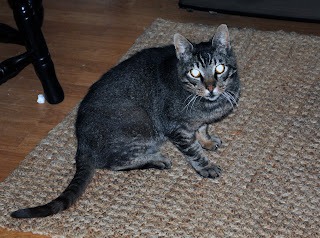 Ollie in the open in the kitchen

As I finish up this post, he has braved the sofa next to Steve and is curled up in a purring ball snoozing away. Progress indeed. You will always be as safe as we can make you here, Ollie. Welcome.
Posted by Jessica Boyd at 10:44 AM

I think the pets who have had a rough life provide a certain level of reward that cannot be found in other pets. We adopted our old lady Malamute '05. She had been found "stray" (I think she was abandoned), and showed signs of neglect. They are a challenging breed to begin with, and she was more so. There were some rough spots, but now she is a loved member of the clan. She is usually glued to my hip when she is in the house, having decided that I am "her person".

I think Ollie will come around. And the cats will work out the pecking order, much like the horses do.