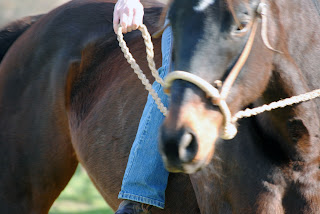 One of the goals from my fear series was to ride in the outdoor arena, a place that has been kinda scary for me for a long time. Though I wanted to end up there to do a little work today, it was not my intention to start there with a horse that hasn't been worked enough over the last two weeks.

Neither Steve or I have recovered from the dumb germ, yet, and it's been two weeks. The horses have not gotten out enough and are understandably a bit on the wild side. I had worked Bar last night so he wasn't completely fresh, but the bounce was still very evident.

Normally, he and I would go into the round pen and dance around before we went into the indoor--let alone the outdoor--arena. However, the round pen was in use and I had already saddled up my big, bouncy horse.

Lena and Steve were in the outdoor arena and were having quite a raucous ride. The horse waiting for Peter in the round pen was reacting to the echoes that bounce into the indoor arena from the outdoor arena by bucking and snorting.

Calabar reacted to both of them. How can 1200 pounds levitate? I don't actually know the physics involved, but I have witnessed it. In person. Recently.

And we did okay. We walked--bouncy, bouncy, bouncy--me feeling his front feet as they moved zoomily (yes, zoomily) forward. Poing, poing, poing. I was doing well. Feet down, sitting solid in the saddle, trying not to curl forward, trying to move with the big brown spring under my butt.

We stayed at a walk. I'd love it if I could tell you I threw my hands in the air and galloped courageously around the arena, but .. no. I did handle a spook and a spin, though, as well as a high level of Thoroughbred energy. Poing, poing, poing.

"What are those??!!" "Those are bike riders on the bike path down below us." "Okay. Iwillbelievetheyarenotdemonsifyousayso." "They are not demons." "K.Fine."

I knew he wanted to run. I even wanted to let him run. I just wasn't ready. Luckily, he agreed to me not being ready and to listened to me. Okay, maybe not luckily but because he and I have done a LOT of work together. Either way, we have made an agreement.

I sang in the saddle, mainly because it helped me breathe. Breathing is good, it helps me relax and not tighten every muscle in my body--a very counter-productive thing to do while riding.

Baby steps are good, it gives you both confidence in each other and yourselves. I think it's great you got to ride in the outdoor. That's one more thing you don't have to fear now. And as you build steps on the ladder of trust things will just get better and better. Merry Christmas!