Oliver has braved the outdoors 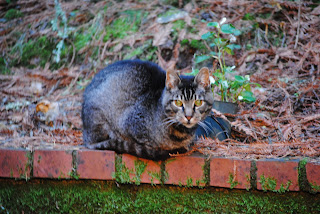 Ollie on the retaining wall, blending with the forest.

For the past couple of days, Ollie-pants (as I lovingly call him) has paced back and forth from the kitchen to the den to the living room, sometimes staring out the back door at the other cats. This usually coincides with feeding time, but he has been known to just stare rather longingly out the door at times, too.

Up until yesterday, he did not actually choose to venture out when the door was opened for him. Yesterday, he ventured.

He did a tour of the deck and the back patio before heading down the side and then under the house. Sigh. 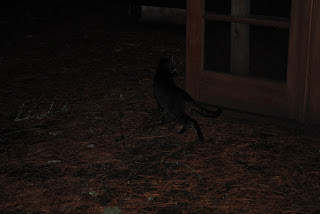 I know it looks dark, but this was at about 7 a.m. Friday morning

I think I called Steve five times during the day, pretending it was for other reasons but really just to see if Ollie had come out again. Alas, every time I asked the answer was still no. All day and through the night I worried. But I also knew Ollie had bonded with us, or at least with the regular tasty food we offered, and figured that the house really represented a giant version of the hassock he'd hidden under for a week before venturing out into the rest of the house.

I worried, but it turns out Ollie has it all under control.

Then this morning, as I was starting to wake up, I heard Steve say hello to Ollie. Not call Ollie, like we'd both been doing, but say hello. I opened my eyes, looked out at the retaining wall I can see from our bedroom windows, and there was Ollie. Long, lean, and ready for breakfast.

We could not convince him to come in the house again, but he seems to be holding his own with the rest of our weird little cat herd. He watched me do yoga through the door this morning, but didn't want to come in when I was done and offered.

It has to be his decision, and  I think he will get there with time--it just may take a little while and some very studious observation of how this whole in-and-outdoor cat thing works in real life. I'm hoping Elmer will be helpful in this endeavor. We will see.

In the meantime, he is doing a fine job of proving he has a place here. He blends into the forest like he was born here and faces down the other cats with calm, quiet resolve. In other words, he is largely unimpressed with their bluster.

Welcome to the forest, Ollie. It is a good home.
Posted by Jessica Boyd at 4:56 PM