It's amazing how fast it can happen, actually. One minute you're riding along like normal, the next you're hoping you can stay in the saddle long enough - and well enough - to get back to the trailer.

Steve and I went out yesterday and had a great ride. We went on a steady uphill trail that really worked the horses, then stopped to have some lunch. Doc and Lena were enjoying the workout and each other, and - since it had been over two weeks for both of them - just being out. 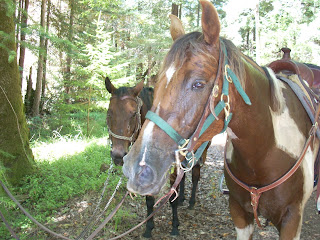 Then we went up the trail a little more to explore, dead-ended at a fallen tree and turned around. I was up in front on Lena when I realized I didn't hear Steve and Doc behind us and I turned back.

Steve was hunched over the saddle horn and in obvious pain, though he really wasn't sure what had happened. Doc had lost his footing a little and Steve says he felt something 'pop' in his hip joint as they both caught their balance. We were at least an hour away from the trailer still, so Steve got off and walked a little, then got back in the saddle and rode pretty silently all the way back to the trailer.

It's a good thing Steve is as healthy and fit as he is, or it would have been a lot harder for him to stay in the saddle on the way back. He had to ride in the way that makes your knees sore, to brace pressure up and off the hip joint. I used to ride that way and my knees would ache for days, but I know it was the lesser of evils in this case.

Today, there is swelling and a considerable amount of pain, but he's keeping it stretched and moving. We've even been into town to get grain, cookware, and have lunch - plus taken a deposit for the van, no less.

It looks like I'm in charge of horse riding for at least a little while. How boring for poor Lena to have only one rider!
Posted by Jessica Boyd at 2:52 PM

How is Steve doing with his hip? Don't forget an out-of-joint hip can have consequences for your back. An hour down the trail sounds pretty rough.

Do you switch off on the horses on your trail rides?