Back in the saddle again! 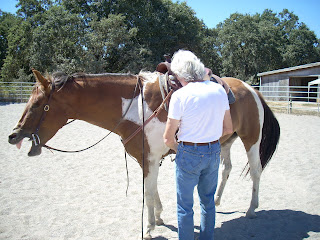 Despite the expression on Lena's face, we are all excited that Steve is back riding again. 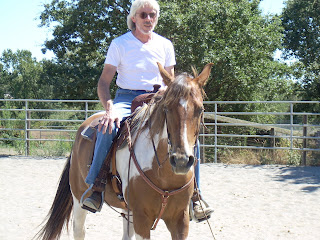 We rode in the arena yesterday and then went out today for a short trail ride. (Only two hours instead of our normal three.) Unfortunately, I left the camera at the barn so didn't document Steve's successful return to the trail.

Actually, it may be better that I didn't because Lena was not on her best behavior today. She was in one of her flighty moods and took off on Steve twice - once we think because his sweatshirt came loose and slid over her butt and once because he picked up his sweatshirt from where someone had nicely hung it on the sign by the parking area. I think it goes back to the blanket trauma, but it was unacceptable nonetheless. I guess we have more horse therapy in the near future.

Doc was on his best behavior, however, so that helped some. It's definitely better to have another horse there, particularly one who is generally calmer and more steady than Lena.

Steve thinks that she also just wanted to run, but of course that's still no excuse for bad behavior.

Luckily, Steve was able to stay with her and didn't re-injure himself. I think she looked a little embarrassed when I put the sweatshirt on Doc, then on me, and neither one of us got eaten, but I'm probably reading too much into her expression. Ha!
Posted by Jessica Boyd at 5:08 PM