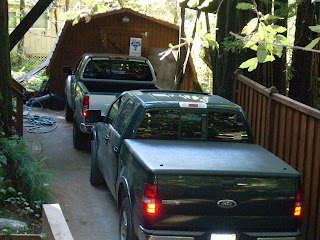 I'm back from OSCON and Steve is back from his backpacking trip. Both were good trips, though in very different ways.

Steve decided two things on his trip: He needed a new camping vehicle and he'd rather have a horse do the heavy hauling.

Steve has had a 1991 Previa van since 1993. It has served him - and me on occasions where the Volvo failed - very well. It has traveled up the Continental Divide and hauled more lumber than any of the fancy trucks I see on a a daily basis. It holds lots and lots of camping gear, and 7 passengers if we ever really needed it to. Vanzo, as he came to be known (sorry, Grandpa, it just fit - Vanzo the Van,) is up on Craig's list, now, because Steve's long awaited small pick-up has finally made his debut. 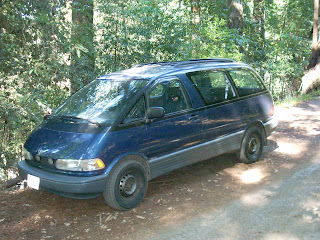 Gus is still the towing machine - and no worries, folks, the Mustang will never leave the family - but the new pickup could come in handy in a pinch for towing, and is certainly a more nimble and powerful backpacking and camping vehicle for Steve alone, and for Steve and me. The most likely name is currently "Sam." Gus is much wider than Sam is. 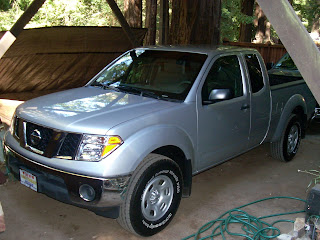 And he's very fun to drive. I actually squealed tires, though I didn't spin him around the way I did Wanda the first time I drove her.

As to the horse doing the heavy work, we may actually get around to horse number two in the next year or so, which is very exciting. I do of course promise to keep you posted.
Posted by Jessica Boyd at 5:19 PM

Vanzo, hunh? You've certainly kept that info quiet!!!! Now, am I to assume you have Wanda, Sam, Gus, and Cecelia? Sad to lose a vehicle names Vanzo, though.