Happy Horse-Owning Anniversary to Us!

Today marks two years since Lena officially came into our lives. Well, okay, technically she entered before that but today is the two-year anniversary of when she came into our care.

Week one: Here is Lena learning how to lunge. Little did she know how very little we would bother two years later. 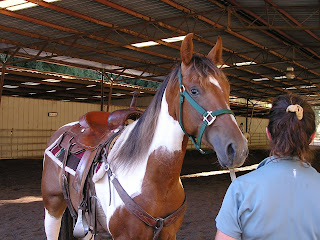 Week two: Right after the nasty colic incident. She was still not allowed to eat and thought that was quite unreasonable on our part. The other thing I notice in this picture is that her mane has completely switched sides. 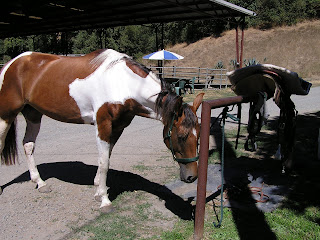 A year ago, we had been at Peter's for about 9 months and were even taking lessons off and on. We didn't have the trailer, so we were in the arena all the time, sometimes frightening other folks. Oh, well. Lena's weight was (finally) getting where it needed to be. This picture is her very sexy Mick Jagger imitation. 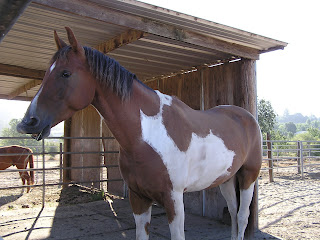 Fast-forward to now, two years after she climbed out of Ike and Cheri's trailer and sniffed the air of her new home - though our time at that barn was short-lived. We have:

I've taken farrier science and massage classes, but avoided nutrition classes, lest I get even more obsessive. Her coat has become more roan-y, her mane and tail are sun-kissed and long, and she grew a little more just in the last year. We think she's finally stopped growing up, though, and now we have to keep her from growing out any more. We all continue to grow and learn in any case.

She's beautiful and we love her - even when she's being ornery. Happy anniversary to us! 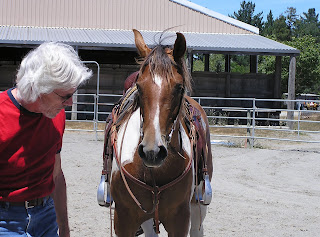 Congratulations. Has it been only a year? Or did I miss it as a two-year anniversary when I went through the blog? Couldn't figure out from the pictures that her mane had switched sides. Looked like it was on the right side in all of them. And roan-y? I thought that was more of a mottled look. Will go back and look at the blog to make sure of how many years. Never mind how much I've learned about horses. Also some about vehicles. And never thought I would.

Aha! Still lists 0 comments. And it is two years. I thought it had been longer than 1 year.