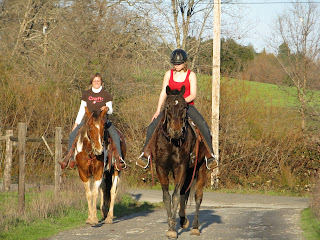 We had some good work with our two racehorses today, including switching of riders and horses. Katie even took Bar over a tiny jump in the arena, then convinced Lena to try, too. Lena did dodge it the first few times, but Katie finally got her to give it a shot.

Bar is doing better every day we work with him, trying so hard to figure out what we're asking him to do and doing it as best he can. We found a used Circle Y trail saddle that seems to fit him pretty well and - once we switched out the stirrups - worked for us as well. Yesterday, both Steve and I tried it and had issues keeping our feet in the stirrups once we started into a canter. We put some heavier stirrups on and it worked much better. Very frustrating to get him up to a nice canter and have to stop because a foot flies loose. It must have been confusing for him, too - I'm sure he couldn't figure out what we were up to.

One of the non-riding things we're working on with him is not itching his big head on us. Obviously, it itches - here he is using a beam to scratch - but we don't make good scratching posts. So, we scratch until he starts to push, then stop. Then when he stops pushing, we start scratching again. He's getting it pretty well, actually, mostly because he loves to have his head scratched. 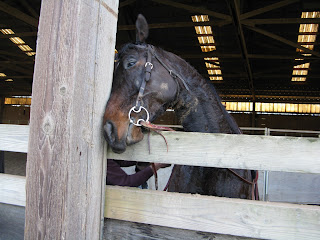 He's fun, and he's fast, and Lena wants to run with him so bad it's driving her crazy. Soon, very soon, we'll take them out and let them go and see what happens.

I'm headed off to Macworld tomorrow and Steve will be on his own until Thursday with the horses. I enjoy working the tradeshow scene, but it will be hard to be away right now. Lena is feeling a hair neglected and Bar is starting to really respond to the work and attention. I'm sure they will both be fine, but I'm not sure I will be.
Posted by Jessica Boyd at 6:05 PM