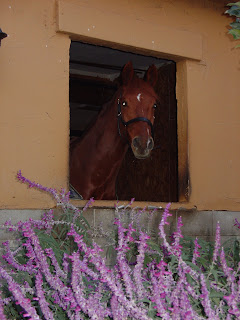 I haven't written much about Willoughby lately and I think he's due for some attention!
The last few months have really been about getting to know one another. He's a different type of horse than what I'm used to. Bee and Fenway are lazy horses who need a lot of encouragement. They aren't bothered by much and would prefer eating and sleeping over working! Willoughby, on the other hand has a lot of go in him. After riding him a couple of days in a row I expect him to be tired, but it's just the opposite. The more fit he is, the more energy he has. He's also very sensitive. He takes a lot in and breathes loudly, snorts, and even squeals at times. It's very cute. But one of his habits that is not so cute is his teeth squeaking. By teeth squeaking, I mean chewing on the bit. It's a combination of stress and old habits. I'm learning to take each ride as its own. If he's particularly hyper or stressed one day, I may only walk. Why just walk? Because I want him to let down and to feel confident under saddle. Instead of pushing him, I'm asking him to get used to the surroundings and conditions as is. So far it's working. Occasionally we have a so-so day and some days (like today), he's amazing and quiet with his mouth.
This has been a good learning experience for me. After some rides I become discouraged because I feel like I should be further along in my training. But I have to remember and realize that with a young horse, taking it slow and getting the basics downs will allow us to progress more quickly and further in the long run.
So that's where we're at! It's a lot of fun and each ride is it's own little adventure!
Posted by Katie at 8:00 PM