Horse stretching on a sunny afternoon 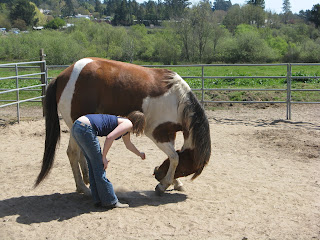 I took some time off today because my daughter (also a Katie) is out of school for spring break. She still likes to hang out with me, which for a parent is a pretty special occurrence, especially with a teenager. We had originally planned to ride - she having been inspired by Seabiscuit and my description of the lesson with Peter - but we got rolling too late so didn't end up with enough time.

We did, however, have time to do some flexibility exercises with Lena and Bar. I've been doing carrot stretches with Lena for at least a year and a half and it's been really good for her. 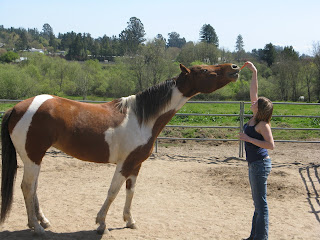 Bar looked at me like I had lost my mind the first time I tried to get him to reach around to his hip for a carrot, but he's figured it out now. He watches Lena and me in the mornings, waiting for his turn. He's not quite as flexible as she is, yet, but he's already improved immensely. 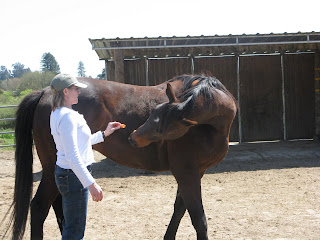 You have to be a little careful with him because he will try to do a quick reach and snatch to get the carrot which not only isn't the nice easy gentle stretch I'm going for, it's also risky for fingers. Lena always grabs with her lips, but we're still working on Bar in that particular area of skill. Though, again, he's much better with his mouth than when we first got him.

Bar likes the "bow" stretch much better than the side to side stretches and, particularly in the picture of Lena, you can see that nice top-line stretch we're going for. At first, Bar would just put his nose to the ground, but he's started coming underneath his chest a little more, now, too. 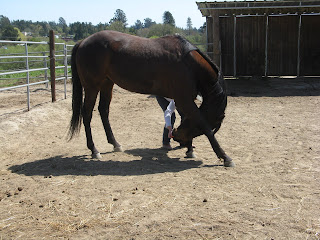 Lena also made a try for my roast beef sandwich. I told her she wasn't that kind of a cow horse. Bar helped me clean his pen, even going so far as to lift the handle of the cart in his teeth. I asked him to please not dump the full cart as I really didn't feel like scooping twice.

After all the stretching - and after we had depleted a good many carrots - Katie plopped herself in between their pens and fed them blades of grass. Not sure who was more content, her or the horses, actually. It was a wonderful thing to hear her laugh and watch her interact in her own way with each of them.

So no riding, but a pretty calm and relaxing afternoon for all of us that was probably almost as good.
Posted by Jessica Boyd at 3:59 PM