How soon they forget 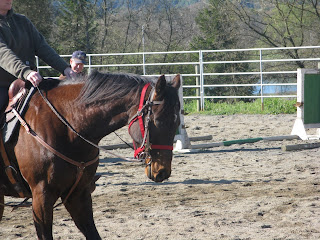 I just had a lesson on Sunday and it went really well. Bar cooperated and I learned a few new tricks with him.

Peter had me follow Bar's head up with my hands, so the higher his head went, the higher my hands went -- all the while, I was working the bit back and forth, left hand to right hand, getting him to give me his face. On Sunday, during the lesson, Peter warned me that it might irritate Bar.

Tonight, however, perhaps because Bar could hear feeding time happening, it did irritate him. There was extreme head-tossing, backing up, even some mild rearing as we argued about exactly where his head needed to be and -- fundamentally -- who was in control.

I did prevail and got a beautiful head set out of him, though we never made it above a fast trot.

It's not really about winning, though. It's really about getting him to relax and carry himself in a way that's better for his body. (And mine, but that's a side issue as far as I'm concerned.) Head up and back hollow are not good for him, and I know he can feel the difference. I'm constantly working to be sure to release the pressure on his mouth when he finally gets himself where he needs to be, give him that reward for doing what I ask. He does get it, and he does respond -- sometimes it's just faster than it was tonight.
Posted by Jessica Boyd at 8:36 PM